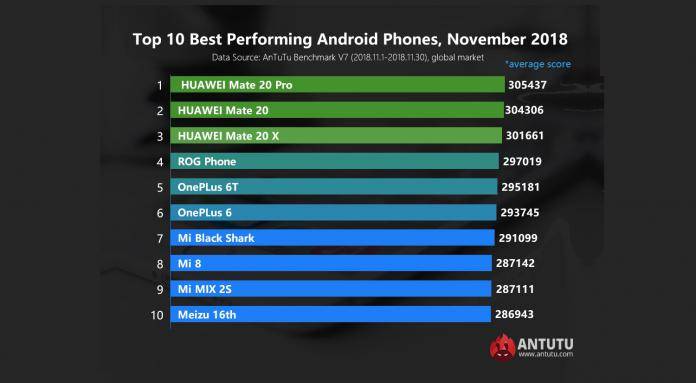 The Year 2018 is about to end. We’re looking forward to checking out different lists and making our own. We have a few favorites this year and we want to know what the rest of the mobile industry think about them. There are some game-changers this year but we’re more excited for 2019 when the in-display-on-screen fingerprint sensor will be more common. The Android community is looking forward to the foldable-flexible smartphone, as well as, the 5G support that may be installed on some of the premium flagships.

AnTuTu has shared its latest list ‘Global Top 10 Best Performing Android Phones‘ for November 2018. The list only shows the popular devices for the past month.

Average Antutu scores of each phone are checked and then ranked. Only those data collection between the 1st of November and the last of the month, November 30, are included.

The data gathered are from at least 1000 units per model. Specifically, the app used here is Antutu Benchmark V7.

The older variant, the OnePlus 6, comes close after with 295181. On 6th, 7th, and 8th places are phones from Xiaomi: the Xiaomi Mi Black Shark, Xiaomi Mi 8, and Xiaomi Mi Mix 2S. Last but definitely not the least is the Meizu 16th.

Note that Samsung is not included. Not even the Galaxy Note 9.