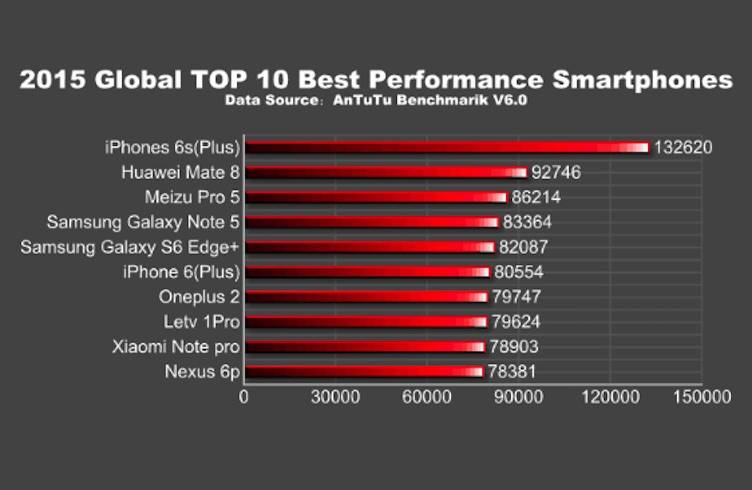 Another year has passed and as with tradition, AnTuTu just posted an annual report relevant to the mobile market. Performance Ranking Reports are highly anticipated because they tell us which phones did well the past year. We’re not talking about sales here but actual performance ranking based on scores gathered from phone users all over the world.

The previous years, we only learned the top Android phones but for 2015, the report includes Android and iOS so we’ll know how the iPhones fare against the Android smartphones. This one is made possible by the Antutu v6.0 benchmark text that covers both mobile platforms.

Nothing’s going to be sugar coated here so yes, the biggest winner is the iPhone 6S Plus. The Huawei Mate 8 followed but with a huge difference in score–from 132620 to 92746. The Meizu Pro 5 came in third place and then the Samsung Galaxy Note 5 and the Galaxy S6 Edge+. Another iOS phone, the iPhone 6 Plus, scored better than the OnePlus 2, Letv 1Pro, Xiaomi Note Pro, and the Nexus 6P.

If we’re talking about Android, that means the Huawei Mate 8 is No. 1. Looking at the processor, this means Apple’s A9 and the Hisilicon Kirin on the Huawie Mate 8 beat the Samsung Exynos E7420 and Qualcomm Snapdragon 810 phones. The numbers gathered were from about 500 data samples. Average scores of one device model were taken into consideration.

Check out our past features and reviews on the smartphones included in the list: