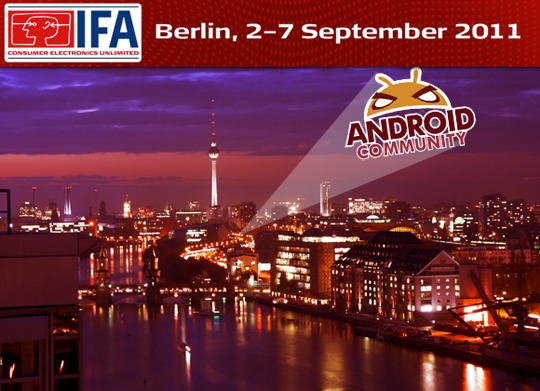 This week in Berlin, Android Community will be covering IFA 2011, one of the oldest industrial exhibitions in Germany and host to a slew of important events hosted by Samsung, HTC, and many others. First and foremost I should mention that we’ll be liveblogging the Samsung Unpacked event on Thursday, September 1st at 11AM CET – that’s 4AM Central Standard Time, so more than likely past your bedtime. The rest of the time we’ll be having an awesome time speaking with a whole mess of other manufacturers and developers across the board.

Before we get any further, I must tell you why this event is called IFA instead of CEU Consumer Electronics Unlimited as their logo suggests. IFA stands for Internationale Funkausstellung Berlin (International radio exhibition Berlin, aka ‘Berlin Radio Show’) and started in 1924 when straight up radios were what you used to listen to the Green Hornet. Now it’s one of the world’s largest international consumer electronics and home appliances shows. IFA takes place September 2nd-7th and unofficially starts off with the Samsung Unpacked event the night of the 1st.

From Samsung we’ve got a whole slew of possibilities lined up, starting with Samsung’s new naming scheme revealing several new devices. That’s low on the scale of awesome. Next there’s the slightly more exciting Samsung Galaxy Q, a big ol’ phone/tablet hybrid whispered about twice now, once with a folding display. Then there’s the Samsung Galaxy S II upgrade — it’s either that or SOMETHING NEW as teased in two brand new Samsung Unpacked trailers, as seen here:

Next there’s some already confirmed bits, first of all the Galaxy S II LTE with a larger display and a fatter processor as well as the Galaxy Tab 8.9 LTE, another tablet we’ve been looking forward to since CTIA 2011. After that, there’s been a leak inside the Unpacked App which showed three devices, at least two of which we can MAYBE expect to be Android devices: Samsung Galaxy Tab 7.7, Samsung Wave 3 (with Bada OS), and Samsung Galaxy Note.

For Sony we’ve got the Sony tablets, both of them having already been seen a few times, but perhaps a greater look is in order. For Toshiba there’s been a note about a ultra-thin tablet to replace the JUST RELEASED Toshiba Thrive. Finally there’s a tip about LG’s intent to release the world’s first 3D game conversion engine.

Join us all this next week!

And don’t forget to join us tomorrow for the official reveal of the USA Samsung Galaxy S II family over in New York City. A full collection coming up this week!