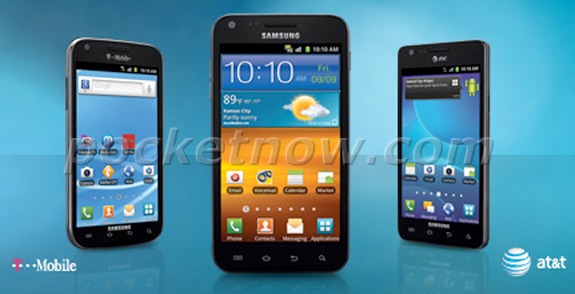 While the Samsung details and rumors keep on flooding in the past few days we now have what appears to be an official Samsung Galaxy S II line-up photo that was leaked. What do you know, no Verizon is shown here either. Some are calling this a “family portrait” of the main three carriers to receive the Galaxy S II here in the US. Looks like Verizon either made a bad choice to not carry it, or has something better on the way.

It was a long wait, almost too long but these appear to be the designs for the US variants. They are all being announced this Monday, August 29th at the NYC event as long as the weather doesn’t cause too many problems (Thanks Irene). Now I’m sure all of you on Big Red are wondering what is next for Verizon, and what are they going to use to replace this other than the Bionic.

We have seen reports that the Samsung Nexus Prime was spotted at Verizon HQ, then yesterday Verizon confirmed they will not carry the Galaxy S II. With more confirmations appearing that Samsung will in fact make the Nexus Prime. Samsung is also preparing an upgraded Galaxy S II and will show it off at IFA it sounds like Verizon is taking a pass because they have something better up their sleeves. Plenty of that is speculation while others are official details either way we have some exciting things in the next few weeks ahead. I have a feeling Samsung is looking to rain on Motorola’s dual-core 4G LTE Bionic parade, but that’s just a guess.