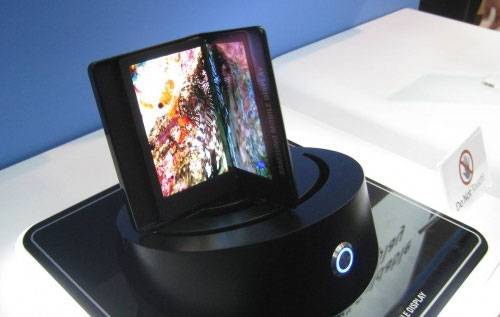 We recently mentioned something being called the Samsung Galaxy Q and early reports are calling it a phone/tablet hybrid from Samsung with a 5.3″ display. We have only heard a few small bits of information on this device but if recent stories dug up by SamFirmware show us anything, its that Samsung might have a sweet foldable android tablet-type device in the works.

This is unconfirmed but with technology Samsung has been working on since as early as 2009 we might be seeing the Samsung Galaxy Q come to market being a 5.3″ phone/tablet with a foldable display but without a bezel — beautiful! Similar to the Sony S2 we have seen lately only without that huge and irritating bezel. If this ends up being accurate the Sony S2 could be dead in the water before it even hits the shelves.

Enough chatting I’ll show you the video from way back in January 2009 from CES that shows what we could be seeing in the near future from Samsung, the size sounds and looks right.

In the video above the display is a neat 5.4” screen with a 960×800 resolution and is AMOLED technology. The leak of the Galaxy Q suggest a 5.3″ screen so this could just be a huge coincidence or Samsung has made a few adjustments and refined the product and will be bringing a beautiful piece of technology to the market. Samsung has shown tons of crazy ideas and designs at CES for years and years so this could be two completely different things, but think of the possibility. Not having to worry about breaking or cracking your screen with that type of protection. I really like the idea and hopefully we here more on this soon.