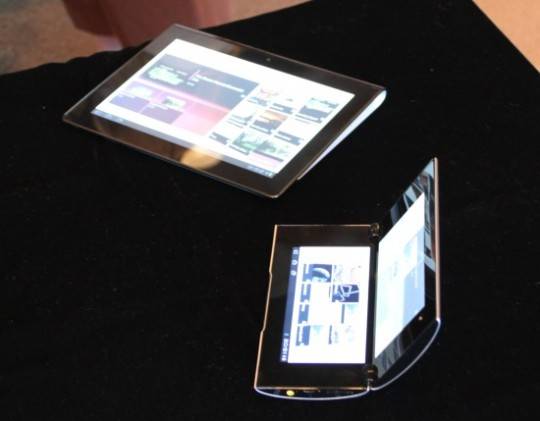 Some new details just came to light regarding Sony’s pair of upcoming Android tablets. The pair of devices were shown off to a lucky few last month, but have not been officially announced yet (S1 and S2 are still code names). A source has spoken up revealing several new tidbits about the pair, including that Sony is expected to announce them officially just before the IFA trade show in Berlin, which takes place September 2-7.

Sony may be a bit late to the tablet game, but I have to applaud the uniqueness of their upcoming devices. The larger S1 features a 9.4″ screen (I’m so proud of them for trying out a different screen size) and an interesting physical design which early reports have said is ergonomically glorious. The smaller dual-screened S2 has a clam shell design similar to Nintendo’s DS gaming system.

First off, both tablets will be available in 16 and 32 GB varieties, with the S1 being available with WiFi only, or 3G as well (the S2 will only be available with 3G + WiFi). The S1 will also feature a full-sized SD card reader (as opposed to the micro-SD cards in phones) to allow for oodles and oodles of storage space.

The other details, all about the S1 include the integration of Sony’s TruBlack and Bravia display technologies, a dock and Bluetooth keyboard, and possible Playstation 3 integration. We’ll keep an ear to the ground as September 2nd draws closer. These tablets are starting to get exciting. I for one am looking forward to see how Sony’s take on the platform shakes things up, something the tablet space needs in my opinion.