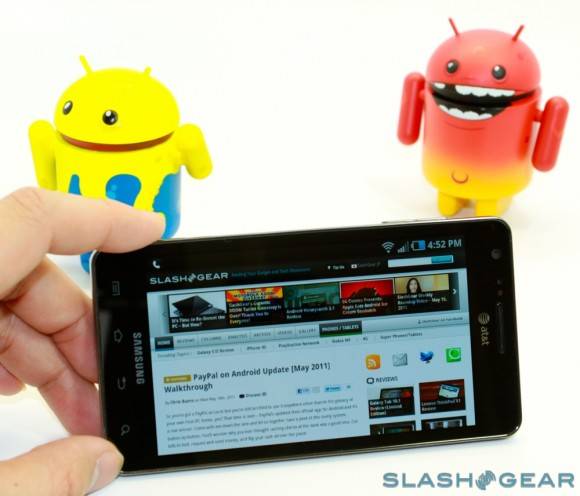 The big IFA show in Berlin will be here before you know it. The show kicks off in Berlin the first week of September and SlashGear will be on hand at the show doing our thing. Ahead of the show, some leaked details claim Samsung will be showing off a new device that skirts the gap between a traditional smartphone and a tablet. The leaked details are rather vague and confusing and come from Yahoo Korea.

The catch with the leak is that the Korean translation is sketchy and there is no official confirmation from Samsung on the device. What we can gather from the details of the leak is that the device will be called the Galaxy Q phone. It will pack in a 5.3-inch screen apparently of the Super AMOLED Plus variety from Samsung Mobile display. The 5.3-inch screen will make the Q the largest smartphone (assuming it has voice capability) Samsung has offered. The Infuse 4G (pictured) with its 4.5-inch screen is currently the largest smartphone Samsung has.

Samsung is said to be placing the Galaxy Q as a stepping stone between the smartphone and a tablet. The larger screen will make it easier for people that use their smartphone for navigation, gaming, and viewing video easier for sure. We aren’t convinced in the face of minimal details that the Q has true voice capability at this point. We will learn more at IFA in a few weeks and hopefully will know all about the Galaxy Q then.