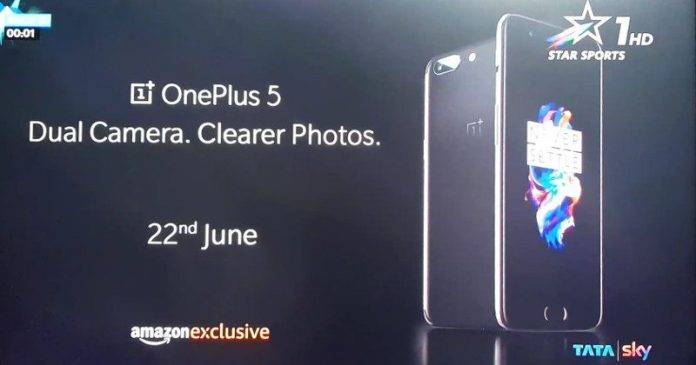 The new flagship smartphone from the Chinese tech startup OnePlus is arriving tomorrow. Like many OnePlus fans, we’re excited to know how the OnePlus 5 will be different from the previous models. This device has been the subject of numerous rumors and leaks and finally this week, we’ll get to know the OEM’s latest offering. We’re interested in trying the curved edges and enhanced audio recording. We’ll also get to try the blue light filter, 8GB RAM, Snapdragon 835 processor, fingerprint scanner, and dual cameras.

In India, the phone will be launched as an Amazon Exclusive on June 22. Over the weekend, the company aired its first promo in the country that showed the front and back view of the OnePlus 5. This teaser showed us there will indeed be dual rear cameras as already confirmed. This TV ad has aired during a cricket tournament finals for the ICC Champions Trophy. Bollywood Amitabh Bachchan who is also the Indian brand ambassador for OnePlus was shown unboxing a smartphone which we’re assuming is the new flagship device.

The phone matched the one that wasexclusivelyy leaked by technoblog last week. You’ll see the dual cam setup, antenna lines, curved sides, front fingerprint sensor, and the black shiny finish. We know the phone will have four color variants and it will indeed be powered by a Snapdragon 835 processor.

What better way to promote a new flagship than during an important match watched by millions of people. You see, a lot of Indians are into the sport, or at least, watching the game.

The OnePlus 5 will be formally announced tomorrow, June 20, Tuesday, so stay tuned.