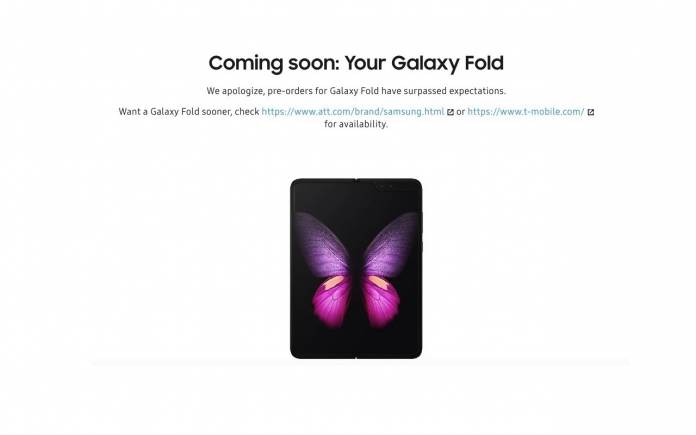 More information about the Samsung Galaxy Fold is expected to be shared in the coming weeks and especially after the first ever foldable phone from the South Korean tech giant is officially released in the market. The phone is coming and we’ve been telling you what you need to know. We’ve seen the design and features as detailed in a demo video. It is expected to roll out next month with a high price tag and will be followed by more Galaxy foldable phone models.

Samsung’s first foldable phone was spotted on Geekbench earlier. We were told it will also come to the UK via some retail shops and EE.

That Samsung Galaxy Fold unboxing video made us more excited. If you’re like us who checked Samsung’s website right away to try and purchase, sorry, but pre-order is now closed.

According to Samsung, “pre-orders for Galaxy Fold have surpassed expectations.” You can still check other carriers like T-Mobile and AT&T for availability and pricing.

AT&T lists the Samsung Galaxy Fold in Space Silver and Cosmos Black with 512GB onboard storage with a $1,979.99 retail price of $66/month for 30 months on installment. T-Mobile will release the phone on April 25 with the following specs and features: 600 MHz Extended Range LTE support, LTE-Advanced, 256 QAM, 512GB storage, 4380 mAH battery, and wireless PowerShare capabilities.

Samsung will make an official announcement soon especially since there are six pro-grade cameras, a unique 7.3-inch display, 4.6-inch Infinity Flex Display, and a Multi-Perspective Camera System. Note that the device will be available in select retail shops in the United States and other countries.