Google launched the Android Go over a year ago because Android One was a no go. It is basically the same but with some minor differences. For one, the Android One runs not just on budget-friendly devices but also on mid-range and premium models. On the other hand, Android Go is specifically for low-specced phones only. We’ve seen a number of Android Go devices already from different OEMs but nothing from Samsung yet. More phones were unveiled during the Mobile World Congress and soon, more Android Go apps are being released by the tech giant.

Some of the brands bringing Android Go phones to the market include Micromax in India, ZTE, Nokia, Alcatel, Huawei, Meizu, and ASUS. There’s the ZTE Tempo Go, Huawei Y5 Lite (2018), Alcatel 1X, Meizu Android Go, Nokia 1, and the ASUS Zenfone Live L1 as examples. As for Samsung, it was reported to be testing out its Android Go phone in India and adjacent markets soon after a model was spotted on Geekbench which was actually believed to be the Samsung Galaxy J2 Core. That’s still unconfirmed but we’re just glad to know the South Korean tech giant is jumping into the bandwagon.

Samsung’s first Android Go phone was sighted recently and we noted how it might have a slight change of heart. We said it’s something to anticipate for because this is the first time Samsung is letting its guard down. You see, the company has been very guarded that’s why there’s the TouchWiz and the new Samsung Experience.

Samsung uses its own mobile OS on top of the standard Android platform. An Android Go Samsung phone may offer a better experience even if low-specced. Then again, we unearthed new information the Android Go phone from Samsung will not run on stock Android. Apparently, the Samsung smartphone will run Android Go apps on top of Samsung Experience. 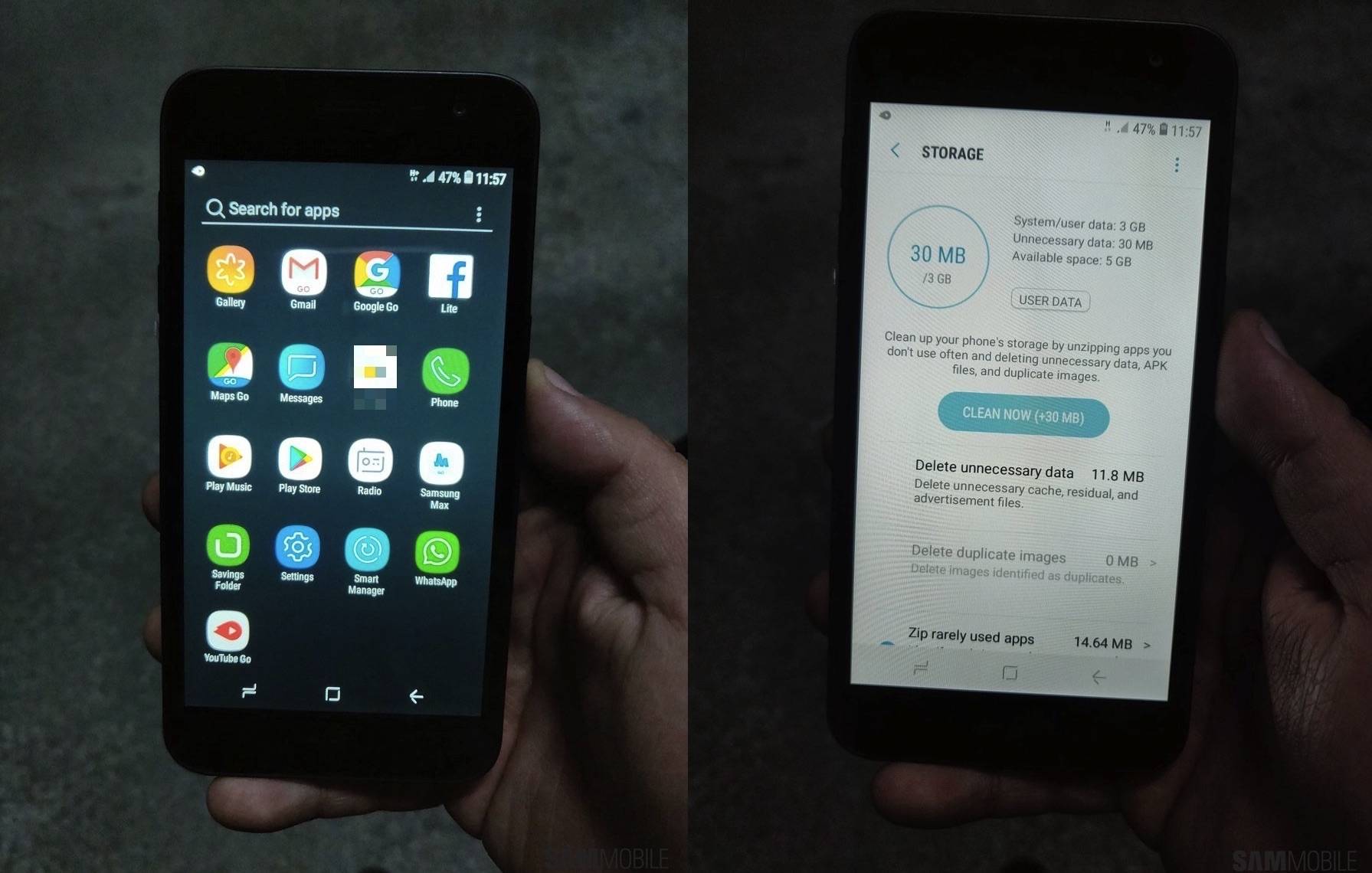 This is somehow different from other Android Go phones that run on stock Android. To be fair, Android Go isn’t always expected to deliver such Android experience. The new platform is ideal for those who want a no non-sense and less complicated mobile experience on low-cost phones. It works by being able to run on low storage and less memory.

Samsung Android Go phones run Android Go apps but not all features are enabled or being used. For example, Samsung still uses its native Device Maintenance feature instead of Android Go’s own storage management and data saving functions.

We see on-screen navigation keys but interestingly, there is no Infinity display, at least, not yet. The latter is usually a special feature of mid-range and premium Samsung phones. Details are scarce but a Samsung Android phone device is being tested not only in India but also in Sri Lanka, Nepal, and Bangladesh. Hopefully, we’ll get to see one before summer ends or maybe just before this year closes. Let’s wait and see if the company can finally rival Xiaomi in the Indian subcontinent with the launch of the Android Go Samsung Galaxy J2 Core.