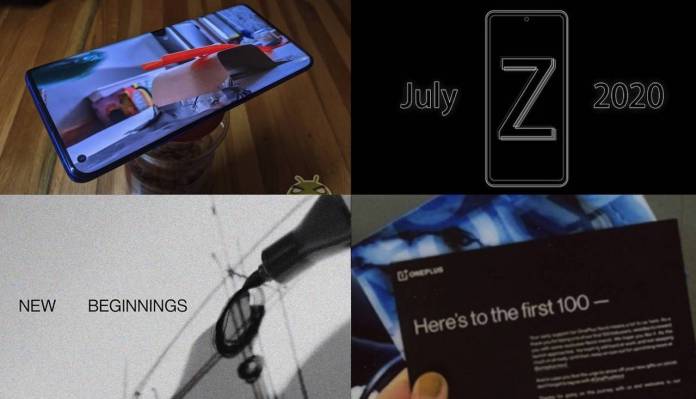 In about a few days or less than a couple of weeks, we’ll get to see a new OnePlus phone. This not-so-mysterious device is believed to be OnePlus’ new mid-range offering. The Chinese OEM that truly lives out the ‘Never Settle’ attitude has always focused on flagship phones with the last one, the OnePlus 8, coming out in two variants–the regular OnePlus 8 and the OnePlus 8 Pro. A OnePlus 8T version can be expected but that is saved for later in the year.

The idea of a mid-ranger from OnePlus was first heard back in April. It is said to be a mid-range Android phone with a flat OLED display and is expected in July. It was known as the OnePlus Z according to a tipster who has always been spot on with the information he usually shares. There has been no official statement from OnePlus yet but we’ve seen several teasers and speculations already.

The OnePlus Z could be an affordable flagship killer. We know a few things about it like the 6.5-inch screen with a 90Hz refresh rate, smaller screen to body ratio, Snapdragon 765 processor, and an in-display fingerprint sensor. Since this is mid-range, we can expect lower specs on the imaging department, 128GB onboard storage, and 6GB RAM. The processor from Qualcomm may even offer 5G connectivity. Perhaps the Always On Display project may also be implemented.

When it comes to imaging, a triple rear camera may be expected: a 48MP primary, 16MP wide-angle lens, and a 2MP macro shooter. The selfie snapper will be 16 megapixels but earlier today, we heard about the dual 32MP plus 8MP selfie cameras. A punch-hole may be placed in the middle. We don’t think OnePlus will add the camera filter here. The 4300mAh battery with 30W fast charging support may be applied.

OnePlus is definitely making affordable phones as confirmed by CEO Pete Lau. A July 10 launch in India may happen. We’re assuming it will only be an online-only event.

The OnePlus Z is now known as OnePlus Nord and was earlier referred to as the OnePlus 8 Lite. It will probably run on Android 11 Beta and will come with the new OnePlus Launcher v4.5 with a swipe down to access Shelf. The price will be mid-range, meaning it will be affordable at ₹24,990.

That is $330 in the US. If true, then it’s definitely good news for OnePlus fans who can’t afford the $600-$700 phones. Availability will be India first and then some key markets in Europe.