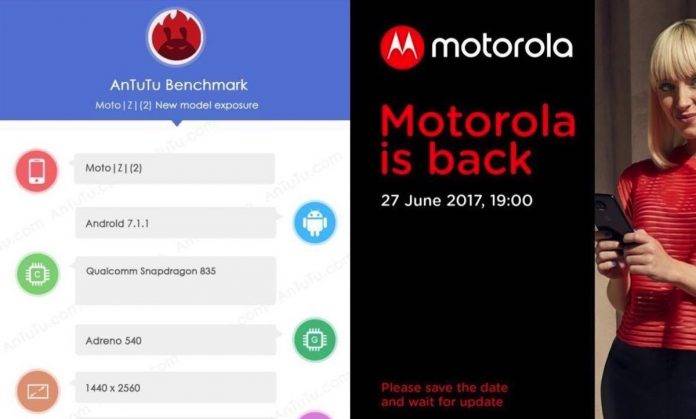 The latest Android phone to be sighted on AnTuTu is this Moto Z2 from Motorola. The upcoming phone is listed with specs that we already know like Android 7.1.1 and Snapdragon 835 processor. It was previously seen online and now we’re just waiting for its official launch. This is different from the Moto Z2 Play and the Z2 Force.

We’re curious to know if the Moto Z can support Gigabit LTE but the AnTuTu list is limited to the following information: 4GB RAM, 64GB onboard storage, Adreno 540 GPU, Snapdragon 835 processor, 5MP and 12MP dual camera setup, and a 5.5-inch screen with Quad HD resolution.

The Moto Z2 is expected to be introduced on June 27 at 7PM according to the Motorola poster we just saw. Like the successful Moto Z phone from last year, the Moto Z2 2017 version will be modular. You can use various Moto Mods with the Moto Z for added features like the Keyboard Mod. Mods revealed during the Motorola hackathons will also be offered including the Edge Moto Mod and gamepad.

The Moto Z is also believed to have a 6GB RAM model and run Android 7.1.1 Nougat out of the box. Still no details on availability and pricing but we’ll let you know soon.