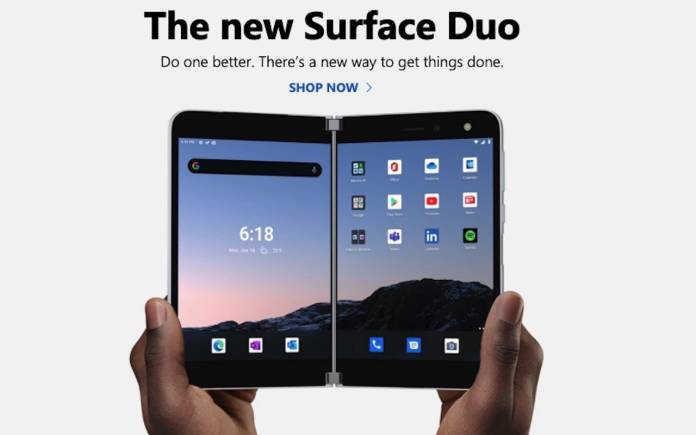 The Microsoft Surface Duo is finally available. Well, you won’t find it anywhere else in the world but only in the United States, at least, for now. To those of you who have been anticipating its arrival, you can now buy the device from Microsoft or AT&T. The software giant lists the tablet with a $1,399.99 price tag. You can also have it under installment for only $46.67 per month. You can purchase it unlocked from the Microsoft Store or carrier-activated from AT&T.

Much has been said about the Surface Duo tablet. It may launch outside the US next year. We believe it will also be sold from Best Buy soon. We’ve seen the first look and hands-on video. People have started comparing it with the Samsung Galaxy Z Fold 2 because of their similar form factor.

A few weeks ago, the Surface Duo scored high in a benchmark and outperformed other flagships. We shared with you the camera features and UI we knew so far. The Surface Duo comes with enterprise-level security by Microsoft. We agree that it is ideal for most tasks.

The device was promised with three years of Android upgrades so you shouldn’t worry about it. The Surface Duo is definitely ready for mobile productivity. To review, here are the specs: two 5.6-inch FHD+ OLED screens, 4:3 aspect ratios, 9.6mm when folded (dimension), 3577mAh battery with 18W power adapter, Qualcomm Snapdragon 855 processor, 128GB or 256GB onboard storage, 6GB RAM, 11MP selfie camera with F/2.0 aperture and LED flash, and Android 10 with a customized interface.

Purchase the Microsoft Surface Duo from HERE. Choose between the 128GB or 256GB model (50/mo. or $1,499.99). You can also use the unlocked version on Verizon and T-Mobile networks. Feel free to trade-in an eligible device and get as much $70 cashback or credit from the Microsoft Store.