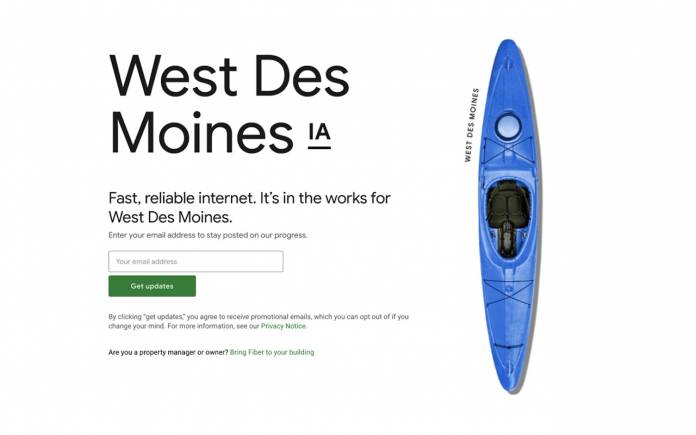 We haven’t heard from the Google Fiber team recently but we know it’s always been true to its mission in helping communities to receive reliable, fast, and affordable Internet connectivity in the United States. It doesn’t matter if the community is small, big, rural, or urban–Google Fiber continues to expand its coverage. The latest city getting its Internet service is West Des Moines, Iowa. Those who live and work in the city can soon enjoy gigabit internet connectivity.

Google Fiber’s expansion in West Des Moines matches the city’s plan for everyone to have access to fast and affordable internet. It’s been a plan since 2016 and this week, we’re learning the City Council is allowing for an open conduit network to be built. The first tenant will be Google Fiber which means the company will be offering the first gigabit Internet service in the city.

Competition may also begin but this gives Google Fiber an advantage. Residents can already sign up on Google Fiber’s website to receive updates and information about the project. The future availability of the service may also be known.

West Des Moines is a great example of a municipality that excels in building and maintaining infrastructure. It is a city-wide effort that brings the best services to the residents. It’s not just an effort by the Google Fiber group but also by the city council. The end result of such efforts is excellent customer experience and satisfaction that can benefit a lot of people, businesses, and even the government.

Google Fiber also managed to do the same effort in Huntsville, Alabama. We can expect more partnerships will begin in the near future as Google continues to expand its reach as it did in Texas, Kansas City, Denver, Charlotte, Dallas, San Antonio, New York, Grandview and Gladstone (Missouri), Provo (Utah) Oklahoma, and Florida.