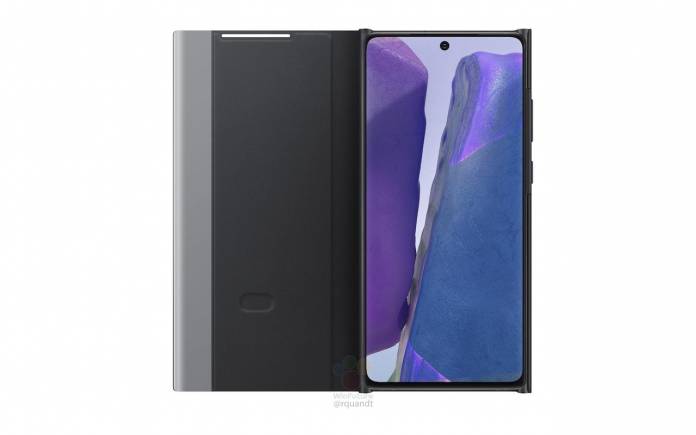 The Samsung Galaxy Note 20 series phones are set to arrive two days from now. We’re not expecting any cancellation nor postponement. The South Korean tech giant has no reason to delay the flagship phones and the other four devices part of the lineup. The Galaxy Unpacked 2020 event is all set. It’s only a matter of time before the market is filled with these new Samsung products that will be headlined by the premium Galaxy Note 20 and Galaxy Note 20 Ultra.

A gallery of images featuring protective phone cases for the Samsung Galaxy Note 20 has surfaced on Twitter. The phone cases are for the Ultra variant so we have a quick look at the smartphone. We can see the very thin bezels and the punch-hole selfie camera placed in the top center of the front display.

The phone cases shown by Roland Quandt (@rquandt) are said to be official from Samsung. This means we’ll probably get to see them during the Galaxy Unpacked 2020 or immediately in stores–offline and online–together with the new Samsung devices.

Samsung’s official phone cases for the Galaxy Note 20 Ultra are available in Black, Gray, Green, and Pink. They probably complement the official colors of the phone as we mentioned before. There could be the Mystic Bronze, Black, Gray, and the Green.

Much has been said about the Samsung Galaxy Note 20 series and we can’t wait to confirm everything we know. The Samsung Galaxy Note 20 pre-order promo that leaked could be true. We’re looking forward to that enhanced Exynos 990 SoC and a 25W charger. There’s also that Xbox Game Pass, 360 Spin, enhanced camera features, and energy-saving HOP display tech. The phone won’t inherit Galaxy S20’s focusing issue but it may come with a rounded rectangle shape and a flatter screen.