Samsung may be busy with the Galaxy S8 and S8+ and the refurbished Galaxy Note 7 but it doesn’t mean that it has forgotten the older Galaxy S7 and S7 Edge. In fact, we just tried turning its fingerprint sensor into a capacitive home button. Last March, the Verizon S7 duo finally received the Nougat update a few weeks after T-Mobile rolled out a similar upgrade. We knew T-Mobile had been working on it since February.

Samsung officially released Android 7.0 Nougat for the S7 and S7 Edge as early as January but it’s taking mobile carriers some time to release their own versions. We’ve also seen the manuals months after the Beta Program was launched in November.

The Galaxy S7 Edge, specifically the SM-G935U variant, which is actually the carrier-unlocked version, is now ready for the much-awaited Nougat OS. One XDA developer shared the good news. A certain wvargas said S7 Edge owners can now download the Samsung Smart Switch software on their computer for a smooth and seamless transfer and backup of files. 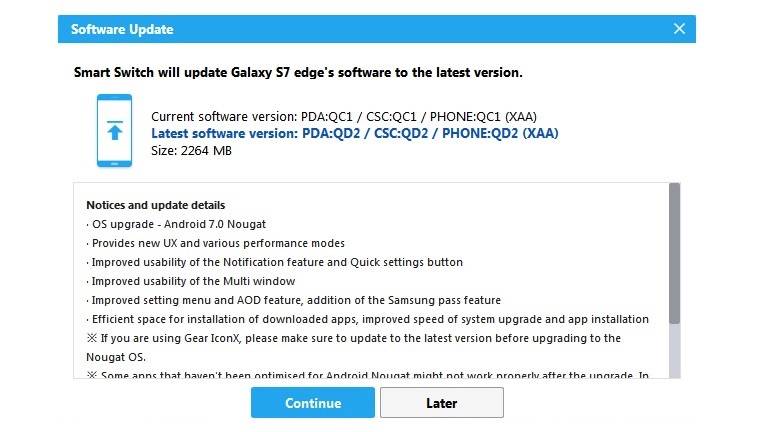 Please note that as with any other OS update, this Nougat version may not work properly. Some versions still not optimized may not perfectly run after the update but feel free to search for app updates on the Play Store or Galaxy Apps.