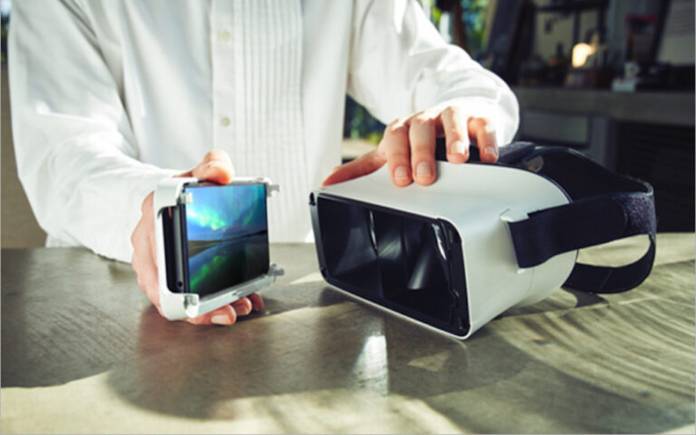 Earlier, we shared with you leaked images of the upcoming Sony Xperia PRO-I. The phone is said to work with VR glasses. It’s something like what Samsung used to do with a Gear VR. This time, a Sony smartphone is said to be attached to a virtual reality headset. Not much information has been shared but there are plenty of images that were leaked. The official product announcement is tomorrow, October 26, so we can confirm everything we have seen or heard recently.

We know the upcoming VR headset will also work with the Xperia 1 II and Xperia 1 III. These are flagship phones that will soon be joined by the Sony Xperia PRO-I.

The Sony VR headset is said to offer support for 8K 360-degree videos. That is super high-resolution which means the accessory will be able to offer premium display and performance. Of course, it will depend on the phone used but that is the highest resolution that can be supported.

The idea isn’t exactly new. We have seen similar setups in action. The Samsung Gear VR will worked with all Galaxy S10 phones a couple of years ago. Not many OEMs have pushed for the idea as more brands prefer standalone VR headsets like the HTC Vive Focus and Daydream View VR Headset. We also remember the LG UltraGear and the Lenovo Mirage Solo VR headset.

Looking at the images above, the Sony VR headset can hold a Sony Xperia phone. We’re assuming the Xperia device fits the virtual reality headset perfectly. There is some cushion on the eye part so the user is protected and comfortable. The cover can be removed–like any other cheap VR headsets we have seen in the market.