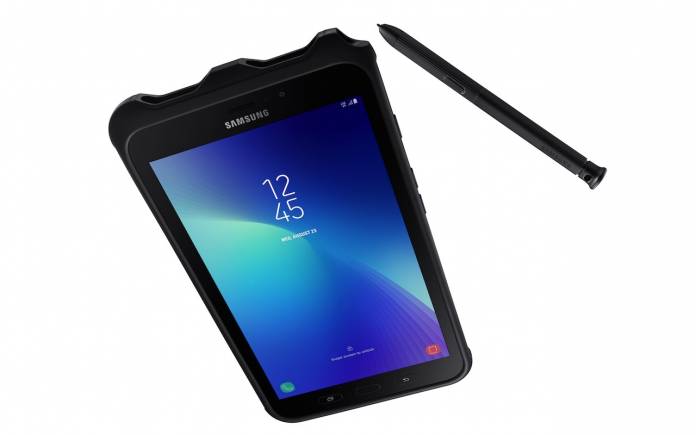 The tablet market may be stagnant these days but Samsung hasn’t forgotten about it. We’ve seen a few Samsung Galaxy Tab models but we’ve always been interested in the Galaxy Tab Active series. This one refers to the more rugged Android tablets as they are ready and able to allow efficient work in different environments. The last one we remember featuring was the Galaxy Tab Active2 which we said was for a workforce that does business outdoors. The rugged tablet was leaked and then announced last year.

The tablet doesn’t have a follow-up model yet until now that we’re hearing about a bigger Galaxy Tab Active. Samsung is believed to be developing a bigger 10.1-inch Galaxy Tab Active (Pro). It should be arriving very soon.

Older models only have 8-inches so this could very well compete with the likes of the Lenovo Tab 4. That is, if we’re talking about display size. When it comes to the rugged tablet category, the Panasonic Toughpad FZ-A2, ARCHOS Sense 101X Tablet, and Getac ZX70 now have competition.

The Samsung Galaxy Tab Active Pro can be expected because a related file trademark was applied recently. The SM-T545 model is said to have a larger screen at 10.1-inches while the other Tab Active models only come with 8-inches. The tablet may also feature S-Pen support as with the other Galaxy Tab Active versions.

For this year, Samsung has already hinted about the Galaxy Tab S5. So far, we know that tablet may run on a Snapdragon 855 chipset and may also come with an S Pen stylus. The non-S Pen version may be called the Samsung Galaxy Tab S5e which has to be held in a certain way for WiFi not shut down.

Specs have already leaked but we’ll have to wait for the official product announcement. We’re assuming the Samsung Galaxy Tab Active Pro will be released together with the Galaxy Tab S5 in several key markets. Let’s wait and see.