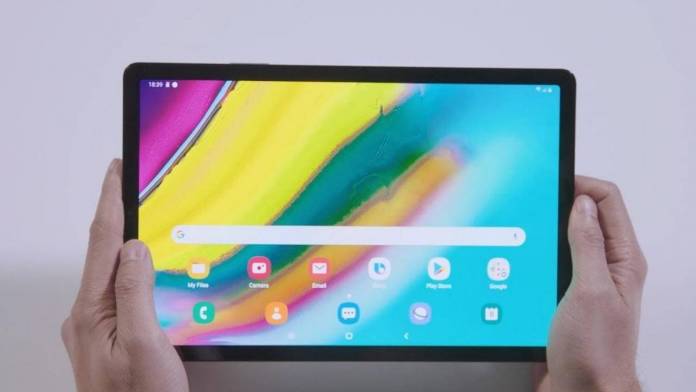 It’s because of things like this that people wonder if those over at Samsung actually test the products they manufacture before releasing it to the public. After the recent Galaxy Fold issues and some alleged Galaxy S10 problems, it seems that another newly-released Samsung device has a rather annoying and irreversible flaw. The Galaxy Tab S5e, if held a certain way, will have its WiFi shut down because of the way they designed and apparently the way you hold it.

Users started complaining that their tablet can’t connect to the WiFi because the integrated receiver is located somewhere in the lower left of the Galaxy Tab S5e. This means that when you’re holding it horizontally, with the front camera pointing to the left, your finger may be blocking the WiFi signal and so you won’t be able to connect to your favorite streaming service or play online games on it. Some users don’t get totally disconnected but they do experience a drop in signal.

Because it looks to be a design issue, there is no other solution to this problem except to hold it in a specific way. If you’re going to use it horizontally, you have to hold it the other way around, with the front facing camera directed to the right rather than the left. This way, your finger or hand won’t be able to block the receiver since it will be at the top of the right (unless the way you hold the tablet will cover that part too).

You won’t have a problem either way you hold it if you’re using it vertically since the receiver won’t be obstructed by your hand as it’s up there. But of course you probably rarely use it vertically as most of us probably watch videos and play games on the tablet in a horizontal manner, sometimes even those just browsing on the web or their social networks.

Meanwhile, those users who complained to Samsung about this got a replacement tablet. But since it’s practically the same device and the receiver is still in the same position, that doesn’t really change things. So the best you can do is to hold the tablet in the way we mentioned above.