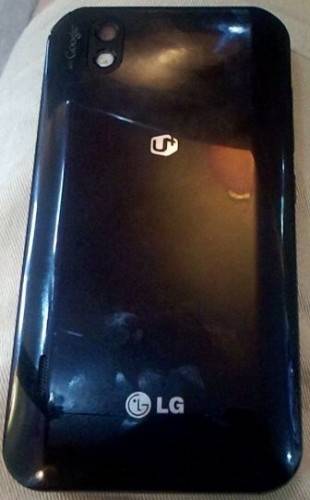 While this isn’t the first time LG has come correct with a dual-core smartphone, it’s certainly the first time they’ve done so with a slide-out keyboard. With their lineup including such gems as the LG G2x, the LG G-Slate, and the Optimus 3D (aka the Thrill 4G), you’d think LG was the king of dual core. Here they prove their willingness to go strange with what may well be the device that makes their NVIDIA Tegra 2 to Qualcomm dual-core processor ratio go from 2-to-1 to 3-to-1 in an instant. Are you looking to bypass the other dual-core QWERTY slider on the block, the Droid 3? Here you go – LG Optimus Note!

This device features what ends up being an enticingly upgraded version of the Tegra 2 processor we know and love, this time clocked at 1.2GHz instead of the normal 1.0GHz. We’ve got to think about this for a second and wonder if NVIDIA will be upgrading their Tegra 2 SoC any more before the quad-core Project Kal-El chip comes out, thinking aloud “gosh, how many more phones will get one of the most spoken-about processors in the past year before NVIDIA stops production on the long-lasting line and hits the ground running with the quad?

Beyond that simple bit of excellence, this device is set to have a cool set of specs that’d be right at home in your everyday dual-core seeking US citizens pocket – but note, as this device has thus far only shown up in the product lists of one carrier, that carrier being LG U+ in South Korea, there IS a chance that this device might never make it here to the states. Then again, the Optimus 3D and the Optimus 2X were already popular internationally before they hit the USA shores earlier this year, so who knows, really?

This device has a Nova LCD Display (700nit) with 800 x 480 pixel WVGA resolution, HDMI support through what’s likely a microHDMI port, Bluetooth 3.0, full QWERTY keyboard, VGA camera on the front, a surprisingly small 5-megapixel camera on the back, 8GB ROM, 1G DDR2 RAM, and Android 2.3.4 Gingerbread at launch. We’re hoping that South Korea’s Fair Trade Commission didn’t put a stopper on production of these cool units via Google, while we’ve also got to wonder if releasing this slightly lesser-great device amongst the DROID BIONIC and the Galaxy S II here in the states wouldn’t be unwise at the moment – perhaps an upgrade before coming on over the pond guns blazing?

The candid photos you see above come from South Korean blog Cetizen, while the slightly more pro-looking pics come from the LG U+ ad spot you’re about to see in the video in this post. Watch for the LG Optimus Note’s unmistakable (yet keyboard pushed-in) visage near the end of the spot. Tok tok tok indeed!