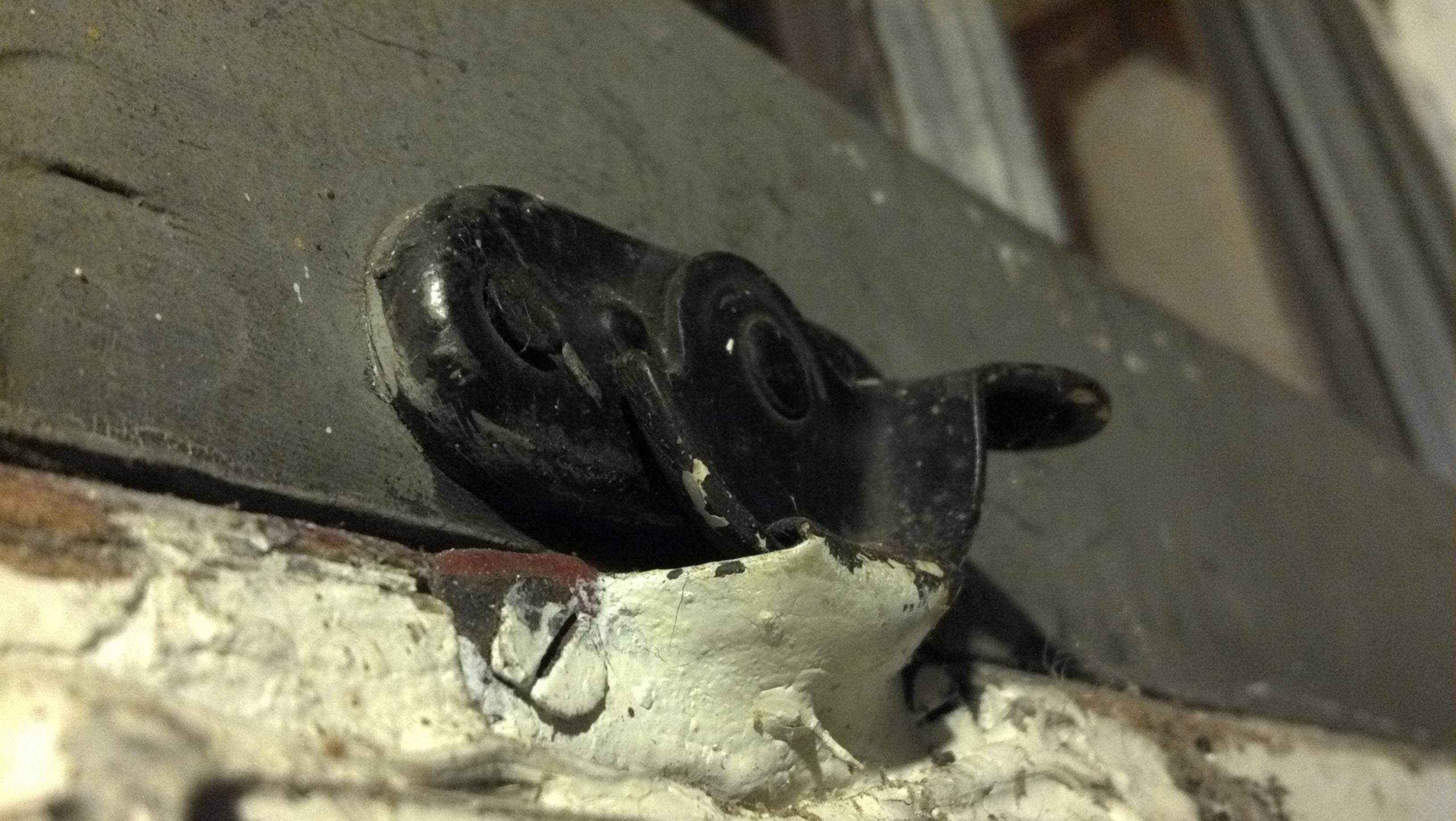 Welcome to the next step in a legendary set of devices by the name of DROID, that is, the shortened version of Android, aka the greatest bit of marketing a business has ever done with the Google mobile OS. DROID is a Verizon-centric term, licensing it from George Lucas himself – does this DROID 3 live up to the name? You bet it does. It’s a dual-core piece of magic with a slide-out keyboard that’s second to none, made in the image of past Droids and topping them all with a smooth combination of hardware and software that’s not to be missed.

Before we begin, let’s hit up the hands-on and unboxing video as we always do, paying special close attention to how smooth the chassis look, the keyboard pops out, and the operating system runs. This is a top-tier device if ever we’ve had the opportunity to hold one, that’s for sure.

Ports include a microUSB and microHDMI along the bottom left side, headphone jack on the top right, power/lock button on the top center, volume up/down in the upper right, single speaker on the front for your ear and another single speaker on the bottom back for all your speakerphone / gaming / and media playing action. The back of this device also plays host to some rather comfortable soft plastic for the palm of your hand as well as a single LED flash next to a HD 1080p capable 8-megapixel camera above and to the right of the Motorola “M.” The Motorola symbol here is sideways, it should be noted, sitting in landscape mode rather than portrait as most phones are prone to do. 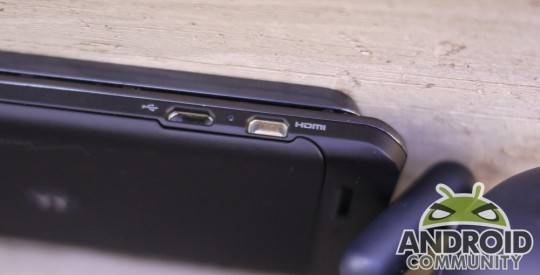 Your battery cover comes off in a single set of 10 snaps, that is, your battery cover won’t be coming off accidentally, no way in heck. One the cover you’ll find a cool 1540 mAh battery, a slot for your Verizon 3G SIM card, and a spot for a microSD card (not included) that you can have upgraded from 0 to 32GB. Sliding your keyboard out, you’ll find that you have a full QWERTY with a second set of keys upon pressing ALD, all 10 number keys sitting separately above the letters. The plastic of which the keyboard is made is similar to the soft plastic on the back of the device, with a bit more grip to it to make for a better and more accurate typing experience – if you’re a physical tapper, that is.

The perfectly large 4-inch qHD 960 x 540 pixel resolution display is bright enough to play games in the deep dark night, light enough to see in the daylight, and sharp as a tack to boot. Outside of Samsung’s Super AMOLED Plus, you’re not going to find a more perfectly impressive looking display than this. As a bonus – you’ll be running Gingerbread with the special Tube Shutdown activated which means the whole display appears to get sucked up into the center like an old tube television would – impressive to see! 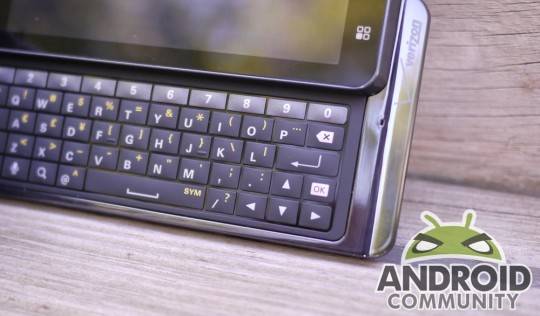 The slider is easy enough to move that you can do it with one hand, yet strong enough to stay together in your pocket all day long. It doesn’t seem as though it’s going to get loose, either, and judging by my Aunt’s several year old original Droid slider, it’s only going to get more rough and tough from here on out, so no worries! The speakers are loud, the speakers are sharp, and the party will be on once you crank up your Spotify account to 11, that’s for sure. Then there’s the Texas Instruments OMAP 4430 1GHz dual-core processor – a hefty competitor to be sure. We’ll be talking about that more in the Performance section, of course.

Inside the device you’re going to find Motorola’s newest look at their custom user interface for Android. You’re running the newest version of Android right out of the box, that being Android 2.3.4 Gingerbread, it riding on what Motorola used to call Motoblur, but if you had Motoblur stand next to what we’re seeing here in a lineup, you’d never know they were related. Find out more about the last time we saw some of the old Motoblur in our full review of the Motorola XPRT. That of course is no match for this, in any respect really, the user interface included. This is easily my favorite Motorola custom user interface, a lovely unique unlock mechanism at the start, the ability to change the four icons in your dock without rooting or downloading a desktop replacement app, five rotating screens for all your app shortcut and widget needs, and a really smooth looking set of icons for all your favorites: camera, browser, email, and your app drawer icon included. 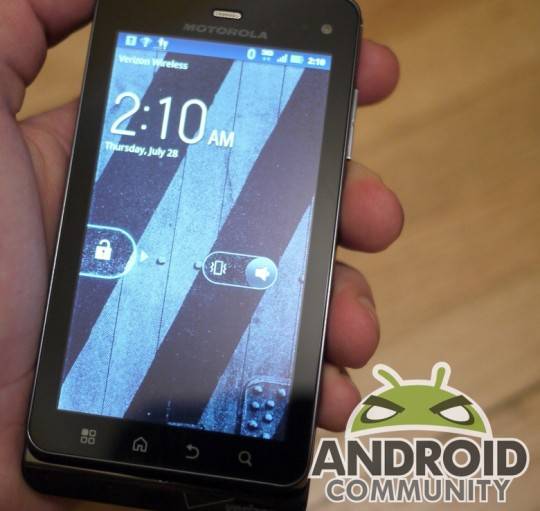 Each of your apps are floating above the ground, this evident upon seeing the shadows they leave behind at the bottom of your home screen and each of your app drawer screens. Your icons are set up in grids of 20, each of them on rotation in the same manner as your home screens, the shadows disappearing and re-appearing whenever a screen is switched. You can choose to view this app drawer by All Apps, Recent, Downloaded, or Verizon Wireless specific. There’s also a nice looking shopping bag outline in the upper right of your screen that leads you directly to the official Android Market if you’re thinking you want to add to your many screens of awesome apps at any time.

Right out of the box you’ve got your usual set of Google-added apps like maps, Gmail, and News, plus you’ve got some real awesome oddities like NOVA HD for some first-person shooting action, GoToMeeting for all your professional meeting needs, VZ Navigator for navigating if you’re not into the whole “free” thing that Google offers in your regular Navigator app, and ZumoCast for if you’re interested in streaming media to your phone and accessing the files on your home computer from anywhere.

Take a look above at a demo of the also brand new game Roboto available on the Android Market now! Side scrolling, punk pop blasting, blaster pistol shooting awesome fun! Check out our full review as well.

Next it’s time for some awesome numbers. Below you’re going to find an impressive array of benchmark numbers found to be racked up right out of the box with this device. Can you imagine how hard this monster is going to pull its weight when it’s eventually overclocked? 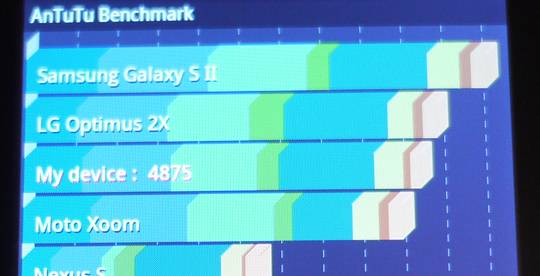 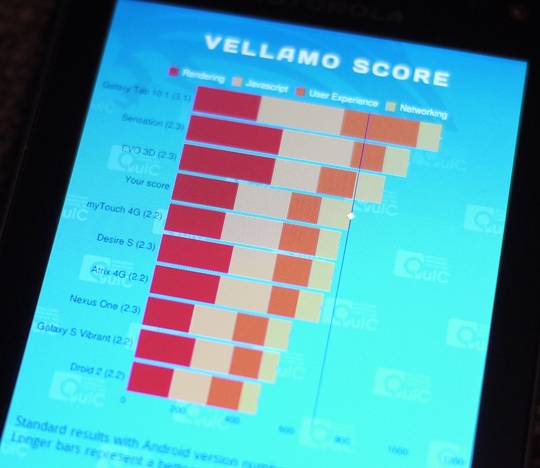 The battery on this device will basically last you a day, we’re talking a 1540 mAh battery on a qHD device with a dual-core processor. While we feel that a slightly bigger battery wouldn’t have been completely uncalled for, especially since the also recent Motorola XPRT has over 1800 mAh, this device DOES last a day with medium use. Don’t expect too much more than that. As for the camera, well, the best way to judge such a thing is always to go ahead and film some material, so here we go: an 8-megapixel camera on the back of this device capable of recording video in full 1080p HD, on the front there’s a slightly smaller VGA camera that doesn’t pretend for a second to be made for actually taking photos and video – use this for video chat exclusively. Below are a couple examples of the high-class quality of the back-facing camera: 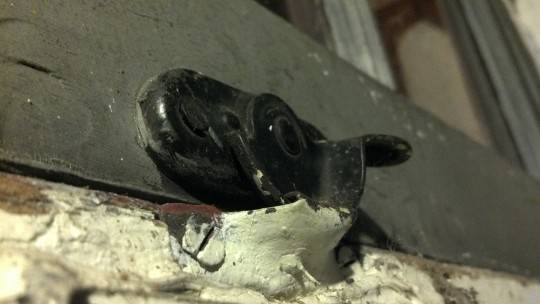 Note here that there’s also a brand new camera interface for you to be using to the fullest. The ability to mute your sound and zoom in and out whilst filming a video is present, geo-tagging is utilized in some amazing ways, and social networking is integrated in a few strange manners as well.

Check out the Droid 3’s camera interface in the demo video below:

With the power of a Texas Instruments OMAP 4430 dual-core processor under the hood and some undeniably well made Motorola slider chassis holding the device together, there’s essentially no drawback here. Sure, it’s not the Droid Bionic, which will be a Motorola device with a dual-core processor AND 4G LTE, but it’s certainly the next best thing. Motorola makes extremely high quality bits of hardware, and this is no exception. Fans of the DROID line of devices made by Motorola will not be disappointed, those upgrading from a feature phone will freak out over how amazing this device is, those moving away from a device with the same size screen with a lower resolution will be joyous over their decision. 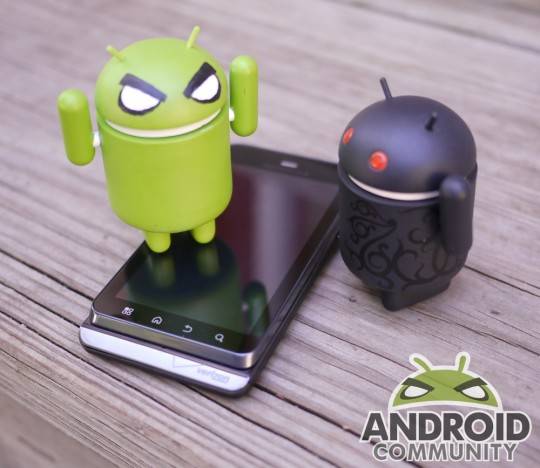 In fact, the only decision you’ve got to make here is over two things: if you don’t want the keyboard, we suggest getting the Motorola Droid X2 instead as it’s very similar in specs, is slightly thinner due to the lack of a push-out keyboard, and is running an NVIDIA Tegra 2 1GHz processor, a processor which we do enjoy very much, very much indeed. Second, you’re not running with the bulls quite yet – that is, you’ve got the dual-core processor, but you don’t have 4G LTE data speeds. This combination isn’t out at the moment on any device, but will be very soon (we hope) in the Droid Bionic. At the moment, this is as good as it gets on Verizon!