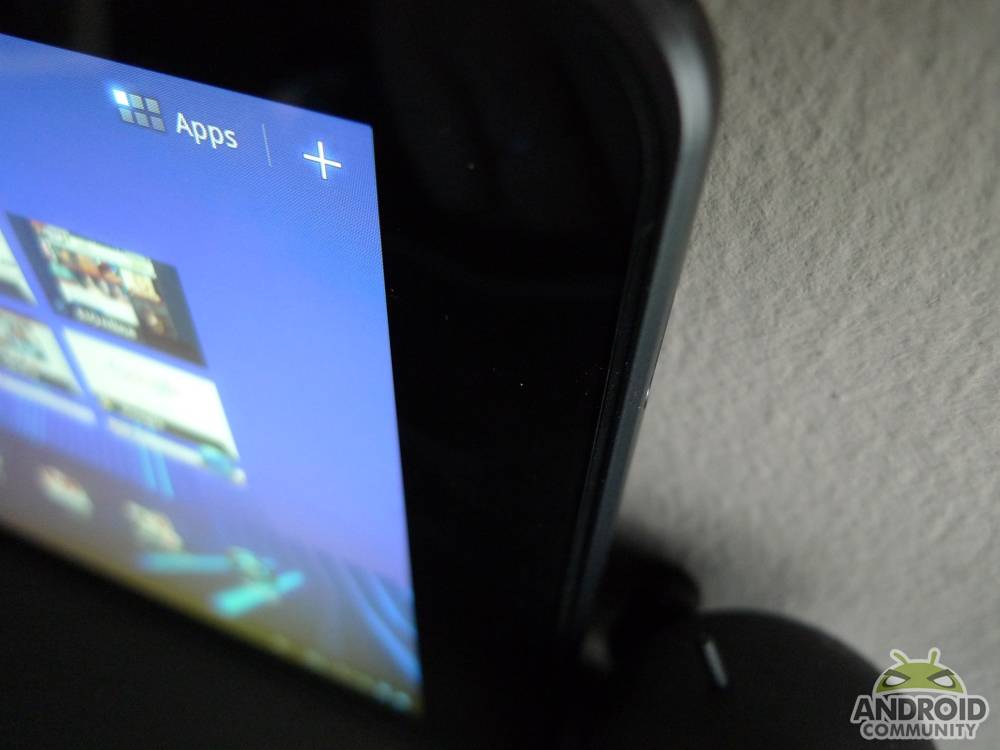 Welcome to the newest installment in The Tablet is Right! This Android 3.0 Honeycomb tablet believes that it is Right because it’s got a screen that’s slightly smaller than the largest contenders in this category at 8.9-inches yet it still totes NVIDIA’s impressive Tegra 2 dual-core processor at 1GHz! This device can record video at 1080p, photograph at 5-megapixels on the back and 2-megapixels on the front, and yes, that is a bonus camera too! 3D recording coming your way – all this and more here!

In exactly the same way that LG has presented the G2x as not just the top of the line phone in their arsenal, but a fashionable accessory for your everyday life, the group shows off here a larger version of what I’d call the LG tab. The tab is a metal slice along the center of the back of the device that has a Google engraving on it, set in the plastic that surrounds it as if to say “look, we’re high class, but we didn’t want to weigh down your experience with a fully-metal backing.” And you’ll be happy with it. The rest of the back of the device is that nice soft to the touch (yet strong, don’t get me wrong,) while the entire device has a rim of dark gray metal – so you know you can still be rough. 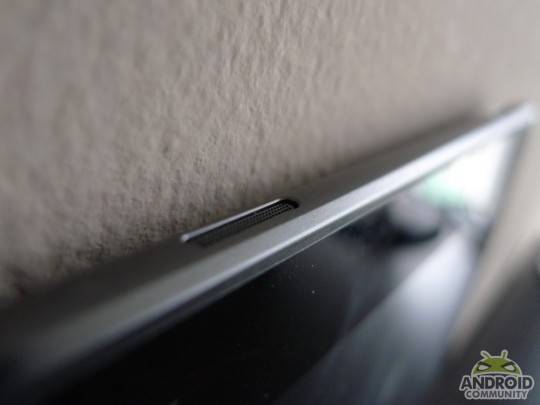 You’ve got two eyeballs on the back of the device that you’ll later read will be assisting you in taking 3D video, and the battery cover comes off with a push down of both thumbs. You’ll be sort of flabbergasted when you realize what’s missing, but more than likely you’ll get over it before you’re done testing the device out: there’s no SDcard reader. You’ve got 32GB of storage inside the device, but you won’t be able to expand it, and you wont be running any apps from your SDcard any time soon – because there is none. The only thing you’re going to find under the “battery cover” is access to your SIM card and a tiny green Reset button. 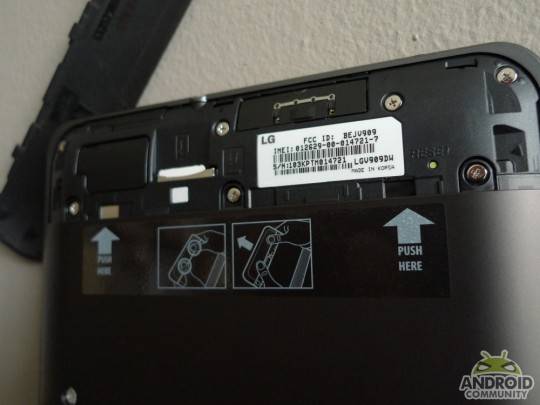 On the left of the device is one of your speakers, your power button, power cord input, and headphone jack. This may not be the best place for the power button if you’re into racing games – I’ll leave this at that. The headphone jack will work out for everyone over here, and the single speaker works well to compliment the other two that sit on the opposite side of the device. On top you’ll find a volume dongle and a single mic hole, while at the bottom you’ll find a bunch of “power pips” as I like to call them – these’ll be important when you eventually purchase a dock, if you enjoy such things. Also along the bottom is your microUSB and full-sized HDMI port. This is an interesting change of pace in ports as basically every other Android device up until now has had a tiny HDMI port that expanded into a larger one only through the special cord that might or might not have come with the device. 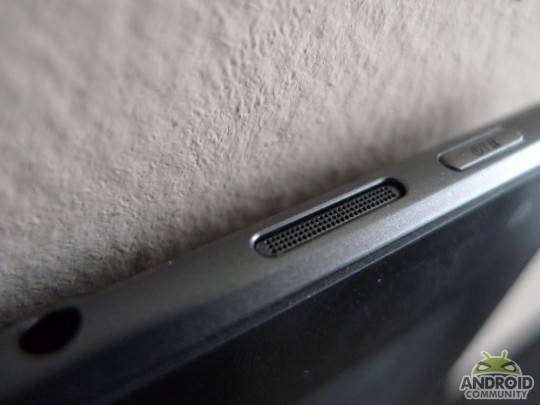 With THIS device you’ll also be having to go to the store to purchase a cord if you plan on using the tablet to output via HDMI. All the other cords are here, on the other hand – power cord, microUSB, microUSB adapter (other side is female USB 2.0), and USB to wall-plug adapter. Also you get a neat pair of blue and red glasses! Wonder what they’re for? They fit nice on my medium-sized head and they’re definitely not throw-away quality. Some rubber (or is it rubbery plastic) in their construction means they’ll be coming with me for some time.

You’ll be finding 35 applications on this device when you start it up – you know what that means? This device is basically devoid of bloatware. It’s a strange world we live in where 35 apps is a small number, but that’s what you’re going to get as a manufacturer distributing an Android device if you want to be Google certified. What Google certification means – if you do not know, is essentially that Google approves of your product and the Android build inside it enough to grant you access to the Android Marketplace. That’s it, essentially. And here LG has gotten that blessing by creating a lovely tablet with basically no changes at all to Google’s Android 3.0 Honeycomb user interface. 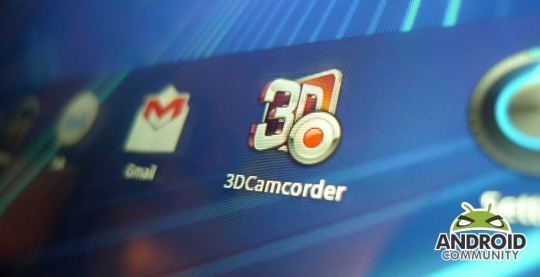 Thusly also, though it might not make that big of a difference at the moment, this device will be high up on the list of devices to receive an upgrade to the newest version of Android whenever that should fall. Same goes for the smaller cousin of this device, the G2x. Good job, LG. Focus on the hardware while trusting Google to present a software that compliments essentially any system it touches is a pro move here made by LG – the only essentials they’ve included that make this device basically unique are 3DCamcorder and 3DPlayer – both of which are so extremely simply put together that I dare you to say they’re failures. 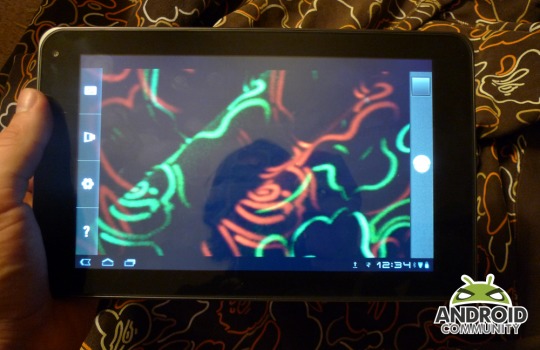 Then you start running everything else on this device and you realize that nothing is pausing, nothing is loading, and nothing is doing anything other than what you want it to do. When I say nothing is loading, I mean it’s loading but it’s doing it so fast that you can’t even tell – this same thing happens while we’re blasting through apps on the Motorola XOOM, also with the NVIDIA Tegra 2 processor – it’s just the best, and that’s it. That said, I wish there were also a native app that allowed 3D photography, and I’m expecting that one’s going to pop up any day now. 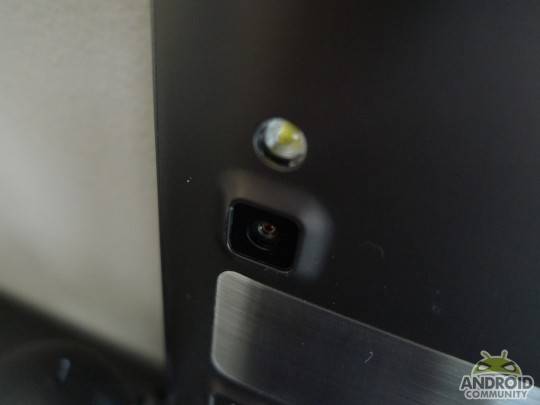 On the front of this device you’re going to find a 2-megapixel camera capable of both video and still photos, while on the back you’re going to be working with a 5-megapixel camera capable of auto-focus, LED flash photography, 1080p video recording, and stereoscopic video recording. Yes, that’s what those two cameras on the back are for. You’ll be wanting to make sure you clean TWO lenses now instead of just one, because filming in 3D is TOTALLY enjoyable. Have a look here at all the examples: 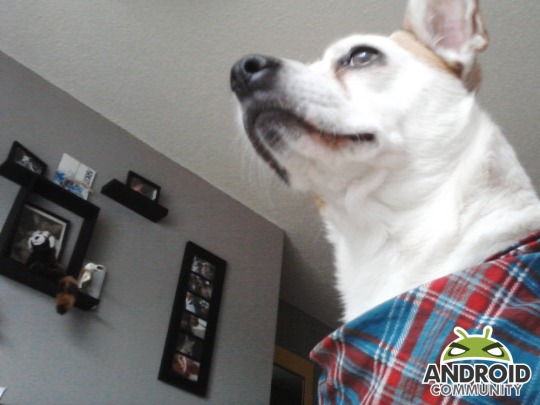 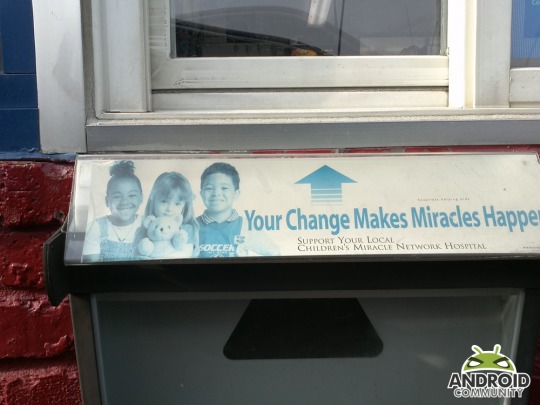 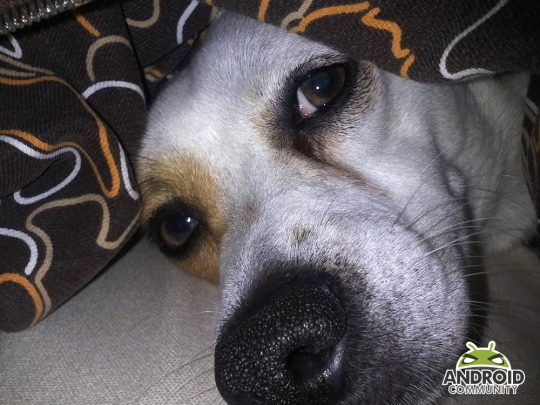 Please forgive the oddness in the audio on the last video – there appears to be a problem between the computer and YouTube, as you’ll notice that when we play the SAME video in the performance video above, the audio is not messed up. Working on it!

This tablet is a dual-core NVIDIA Tegra 2 1GHz holding monster, and since this is the most advanced chipset in the world for tablets at this very moment, it feels extremely fast and undeniably excellent to me. It’s run every single game I’ve tossed at it, even some games I’ll have to edit into this post a few hours after it’s run because they’re pre-release games under embargo. That said, the games that WEREN’T under embargo you can see here in a furious run-through:

Meanwhile, have a look at these fabulous benchmarks, each of them optimized for dual-core processors – I think you’ll notice that this device’s main competitor on several fronts is… itself: 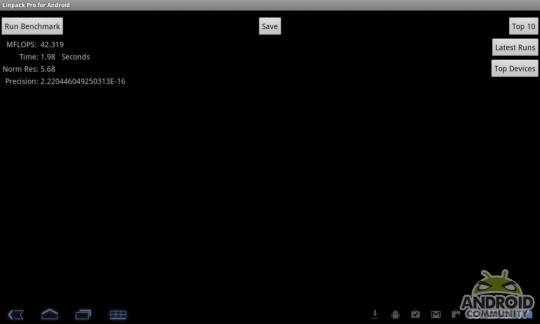 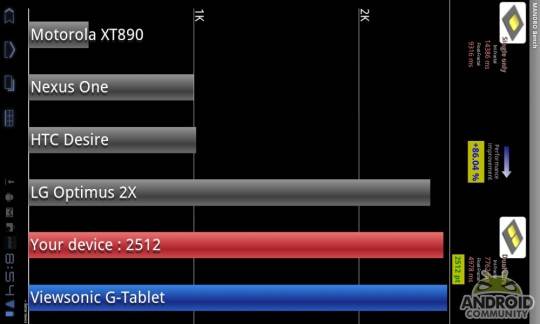 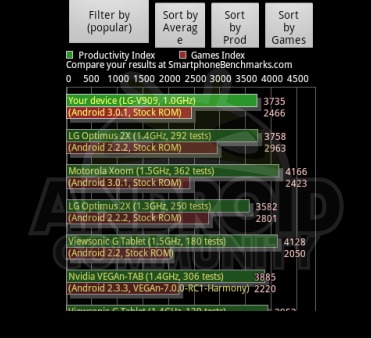 Battery time is as good or better than the Motorola XOOM – and it should be considering the fact that this device is literally smaller than the larger tablet and has essentially the same battery inside. While the XOOM has a 6500 mAh battery, the G-Slate totes a 6400 mAh, and they’ve got the same power cord. That means they’re also both pumping power back up into themselves at an extremely speedy rate. What I’m saying here is that this tablet has, for us, outperformed most smartphone batteries, and this device’s test is being done with a a medium/high workload – testing games, videos, and recording media. 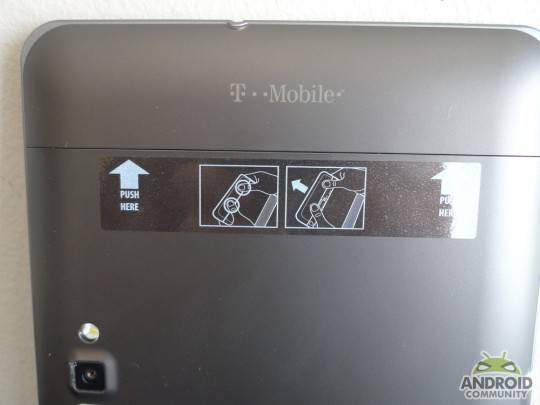 This tablet, very much like the G2x, has a form factor that I feel like a lot of people are going to prefer over most other tablets. It’s got a lick of style up the back with the Google-embedded metal and the metal rim while retaining that comfortable smooth plastic along the back. I found it much more enjoyable to carry around this device than the Galaxy Tab, and not only because it feels better to hold – it just looks more modern. Inside is an experience every bit as satisfying as the XOOM as we’re again dealing with the wholly satisfying tablet-optimized Android version 3.0 Honeycomb. 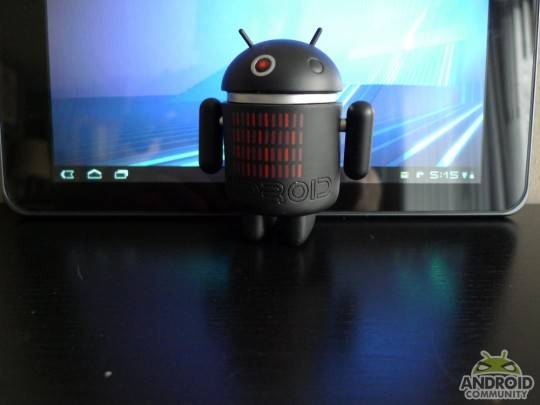 This is a Galaxy Tab killer. Is it a Galaxy Tab 8.9″ killer? I have no idea, I’ve just held that one, never used it. Is it a 10-inch tablet killer? If people were just purchasing the bigger tablets because they were the only ones with the power to roll out hard with the high processor power requirements of the Tegra Zone games, then yes. 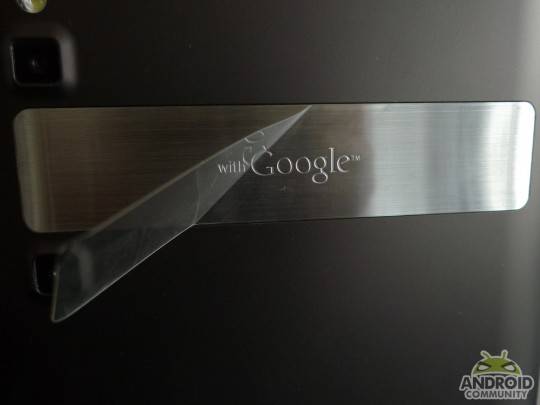 Should you purchase this tablet? Sure, why not? The only thing I’d caution you against is the connection speed. We didn’t experience the best day of our lives downloading around the city with the T-Mobile 4G SIM, but maybe T-Mobile works a lot better in your area – that’s up to you to find out. The tablet feels great, it runs Honeycomb without a hitch, and you’re going to have a good time shooting some 3D video if that’s your bag.