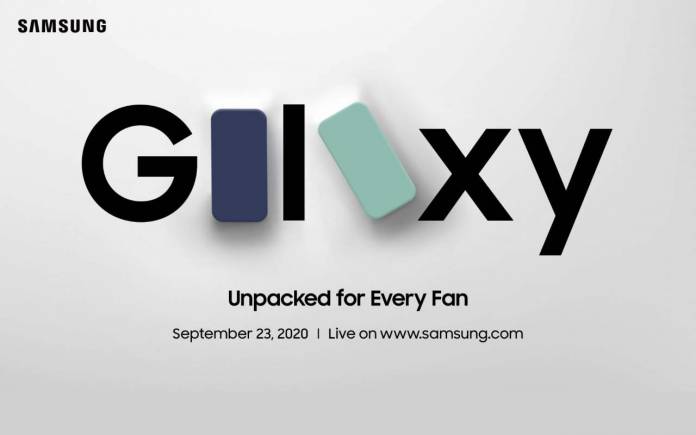 Another Galaxy Unpacked event is going to happen. Samsung is saying this is “Unpacked for Every Fan”. The launch is scheduled for September 23, next week, at 10 AM ET. It will be live-streamed via Samsung Newsroom at Samsung.com. It can be assumed this is for the Galaxy S20 Fan Edition. The other day, we mentioned the smartphone would feature 25W charging and is arriving soon. We’re looking forward to its introduction because we know it’s something Samsung fans really want.

The South Korean tech giant gets the feedback of the fans and use them to come up with better mobile experiences and innovations for the consumers.

Watch the short video teaser below:

The video shows the ‘A’ letters in the word ‘Galaxy’ replaced by blocks that obviously look like phones. It could refer to the Galaxy S20 Fan Edition. What’s more interesting is that they change colors.

We see Gray (or is it Blue?), Mint Green, White, Peach (or Orange), Pink, and Red. They match the colors that leaked of the Samsung Galaxy S20 FE 5G. We also remember that post on Samsung Bulgaria website. It seems there is no stopping Samsung as it’s been very busy recently, introducing new phones left and right.

Just last month, the Galaxy Note 20 series was unveiled together with the Galaxy Z Fold 2, Galaxy Buds Live, Galaxy Tab S7, and the Galaxy Watch 3. There was also the older Galaxy Z Flip getting its 5G variant. The One UI 3 Beta Program for Developers was also opened in South Korea and the US.

We also saw the Samsung Galaxy S20 FE 5G phone renders that surfaced on the web. The design won’t be any different from the regular Galaxy S20 but we can look forward to upgraded specs and features. We already reported it may arrive in Q4 with 120Hz and Snapdragon 865 processor at an affordable price.

There is no confirmation but we can look forward to the phone getting 5G connectivity. When it comes to other specs, some features may be “lighter” to keep the price down. There may still be a 6.5-inch 2300 x 1080 Super AMOLED display with 120 Hz refresh rate, and a triple rear camera.