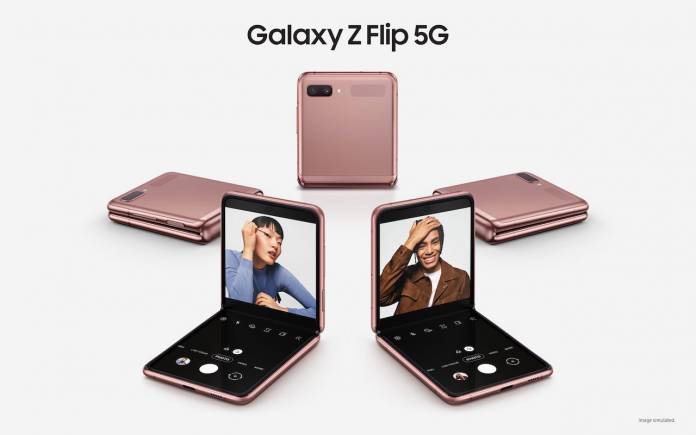 The Samsung Galaxy Z Fold 2 may be the latest foldable phone but the company has another phone model to market. Before the Galaxy Unpacked 2020 event, the South Korean tech giant rolled out the 5G variant of the Galaxy Z Flip as promised. Samsung’s first foldable clamshell phone has been making heads turn because of its design. It’s not perfect and also has some issues but it’s still worth a try despite the premium price. The device was made available for pre-order in the US a couple of weeks ago.

Shipping started last August 7. It is now ready in the country from Samsung, T-Mobile, AT&T, and Best Buy. The clamshell-style folding smartphone is different from the Galaxy Fold but the two have similarities. Meanwhile, the newly announced Galaxy Z Fold 2 has some features from Galaxy Z Flip.

The Galaxy Z Flip 5G is an improved version. The phone runs on the latest Snapdragon 865+ processor which is a huge improvement from the Snapdragon 855 chipset earlier this year. In the US, only two mobile carriers will sell the smartphone: T-Mobile and AT&T.

Both carriers will sell the Samsung Galaxy Z Flip 5G for $1,449.99. The unlocked version is available from Samsung or Best Buy. If you want to pay a lower amount, you can trade in any eligible phone. Samsung will either offer a discount or apply the amount as credit.

The price of the phone is still very high. This Galaxy Z Flip, the $2,000 Samsung Galaxy Z Fold 2, and the Galaxy Note 20 phones are the South Korean tech giant’s offering this second half of the year. Samsung hopes to bounce back from a disappointing first half. We’re curious how it will happen given this global pandemic situation and prices are still high.