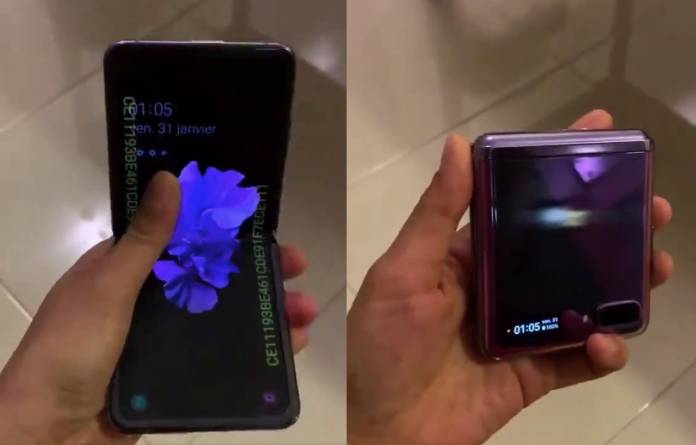 We’re counting the days until Samsung officially announces the next-gen premium Galaxy S20 flagship smartphone series. The Unpacked 2020 event will happen on February 11, 2020, Tuesday. The new Galaxy foldable phone aka Samsung Galaxy Z Flip is also expected to be made public on the same day. If not, there is that February 14 as rumored earlier. It doesn’t matter when or where the foldable phone is announced, we just want it confirmed and made official. There is no doubt the flip smartphone will roll out very soon.

A hands-on demo video has appeared on Twitter. It’s actually said to be the first hands-on video of the Samsung Galaxy Z Flip according to Ben Geskin (@BenGeskin). It was a quick 19-second video that shows us a squarish clamshell foldable phone that opens to a tall phone.

The phone when closed is a bit square. We see a small display on the lower left part that shows the time and date. Beside it is the camera module we’re assuming includes dual cameras.

When opened, the tall screen shows a front display with obvious bezels. There is a punch-hole for the selfie camera. It can be assumed this is a demo or prototype unit. It was captured only last January 31 based on the date on the home screen.

A lot has been said about the Galaxy Z Flip. It may come with a hideaway hinge. It was earlier called the Galaxy Fold 2 and it is expected to come with a better screen and a total of 3300mAh battery. There is also that transparent cover idea, two “official” case options, a crease, 12W wireless charging, and stereo speakers.

We’re expecting more information will be revealed until the official announcement. It’s possibly a Motorola RAZR rival so let’s wait and see how the two foldable-clamshell Android smartphones will fare.