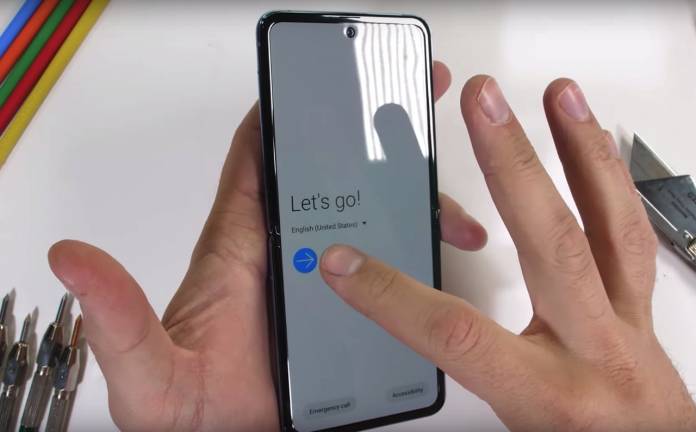 Samsung’s next Galaxy foldable is out. It’s not exactly the Galaxy Fold 2 because it will be a different phone. What we were introduced to is the new Galaxy Z Flip foldable phone that made use of the clamshell format. It’s a rival to the Motorola RAZR that launched back in November. Samsung has been more aggressive when it comes to the foldable phone despite what happened last year to the first-gen Galaxy Fold. The first mention of the next Galaxy Fold model was said to come with a hideaway hinge.

We really thought of a Galaxy Fold 2 but that changed when there was a mention of the Samsung Galaxy Z Flip. Several image renders surfaced on the web. The double-fold design didn’t come true but the phone turned out to be a new flip phone.

On February 11, Samsung announced the new Galaxy S20 series. The three variants were then followed by the Galaxy Z Flip. We’ve already seen the hands-on video even before the official launch but nothing is better than getting a hold of the real thing. The phone was made official and we’ve got our hands-on feature. We also learned about the Samsung Galaxy Z Flip Thom Browne Edition.

The Samsung Galaxy Z Flip has been described to use a foldable ultra-thin glass but with the standard scratch test of Zack Nelson (JerryRigEverything), we can say it’s only plastic. There is some deception there but we totally understand. Perhaps Samsung just needs to come clean and say it really is plastic since it easily scratched at level 2.

You can even scratch the screen with fingernails so if you plan on getting the phone, we suggest you get the correct protection if there is such a thing.

Bending the phone flexes the hinge a but it still works. Put on some sand on the screen, it scratches on some places but not that noticeable.

Now if you’re interested to know how the components are positioned inside the foldabe phone, you may check out teardown videos. Here is a first of the few videos available on YouTube.

Thanks to PBKReviews for the Galaxy Z Flip’s first teardown. It looked easier compared to the Motorola RAZR’s. This one though shows the display being more difficult to remove which means more challenging and more expensive to repair or replace.