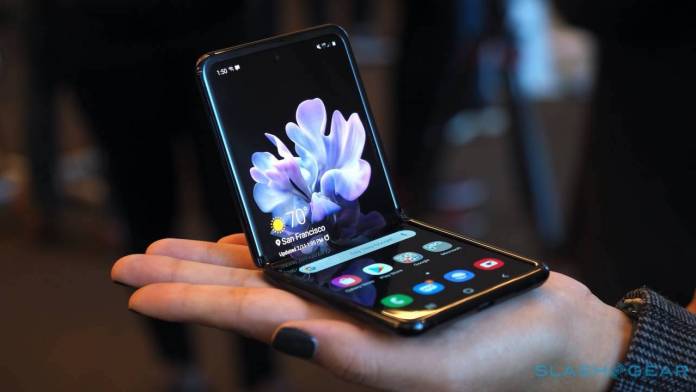 This happened. The Samsung Galaxy Z Flip has finally been unveiled. So the February 11 launch turned out to be true. We’ve been saying the next foldable phone from the South Korean tech giant would be introduced alongside the new Galaxy S20 but we were told it would launch at a later date. The clamshell phone set to compete with the Motorola RAZR is now out so no more questions. Samsung has officially announced the Galaxy Z Flip as its first foldable phone with a clamshell design. This is not the Galaxy Fold 2 as we earlier speculated.

The Samsung Galaxy Z Flip uses a unique foldable glass in all its 6.7-inch display glory. The compact form factor makes it fit just right your pocket or the palm of your hand. As we’ve been saying, it comes with a hideaway hinge. It also shows a custom-built UX we’re expecting to see in future Samsung foldables after this.

The foldable era has definitely begun. Samsung may have missed a few steps last year when it launched the first-gen Galaxy Fold but it has learned its lesson. Hopefully, this flip smartphone won’t show any serious bugs or issues.

The second Samsung foldable phone offers a new kind of mobile experience. Samsung Electronics’ President and Head of Mobile Communications Business Dr. TN Roh has this to say: “With Galaxy Z Flip’s unique foldable design and user experience, we’re redefining what a mobile device can be, and what it enables consumers to do.” The compact and stylish design of the Galaxy Z Flip makes the phone a winner especially to those who’ve been waiting for this to arrive.

Our first impression: the $1,380 is still pricey but we know Samsung fans will still buy it. The phone shows a smaller gap compared to the Galaxy Fold so no dust may come in. The new hinge feels sturdy and firm. There is still a crease but nothing like the Galaxy Fold’s.

The Samsung Galaxy Z Flip doesn’t offer 5G connectivity but it comes with dual cameras. The outside screen is small but you can preview text messages with it. The device will be available on sale beginning February 14 which is Valentine’s Day.