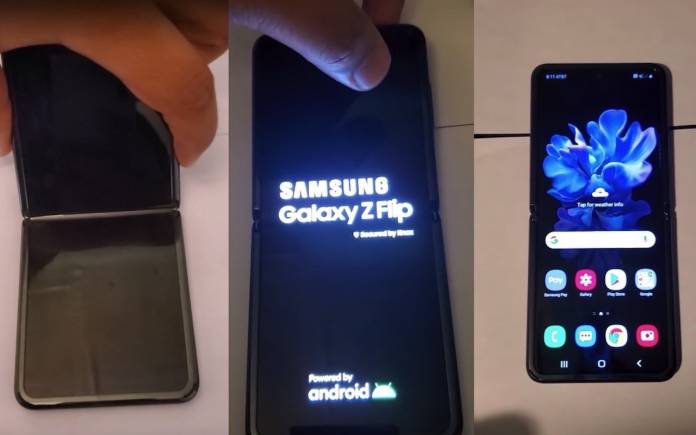 The Samsung Galaxy Z Flip will come out this week. The February 11 launch is fixed and the Unpacked 2020 is a ‘Go’. Samsung is not canceling anything and it’s all set to announce the Galaxy S20 series. We’re not certain about the foldable phone because there is a rumor the South Korean tech giant will make a later announcement on February 14. That is Valentine’s Day and Samsung wants to be your date again. Two new videos have surfaced on YouTube, showing off the upcoming Samsung foldable phone.

The first hands-on video starts with a folded but opened foldable device that when turned on shows the Samsung Galaxy Z Flip bootup screen. Startup starts after a few seconds, showing the AT&T logo and then the home screen–dated February 8, Saturday. So this was shot over the weekend. Watch the video below:

Nothing much but we can say the opened flip smartphone looks like a mid-range Galaxy smartphone. We see a notch in the middle of the top part of the screen for the selfie camera. The device looks taller though.

The Samsung Galaxy Z Flip runs smoothly without any problem but the real test is when the phone is out in the hands of real users. We notice some lag when YouTube was opened but we’re assuming that’s because there’s no WiFi or mobile data yet.

A second video is available, albeit a quick one, but shows the Samsung Galaxy Z Flip folded in action. The folded device shows a squarish phone with curved, rounded edges. The hinge shows a shiny Samsung logo. We’re guessing that one is also made of stickers that may fall off eventually.

The back of the clamshell phone, when fold, shows a small display on the lower left part plus an LED flash and the dual rear camera. It’s not clear if those cameras can be used for selfies even when the device is closed. We’ll have to wait and see for the official announcement.