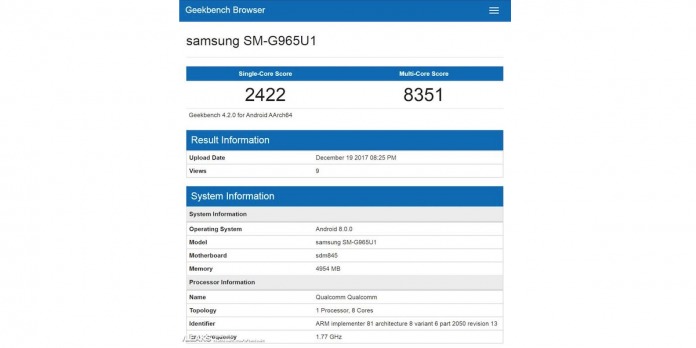 We may be focusing more on the Galaxy S9 but this week, more information about the bigger variant, the Galaxy S9+, were sighted on Geekbench. Much has been said about the standard Galaxy S9 but allow us to focus on the S9+ this time. The Plus variant is said to be powered by Android 8.0 Oreo out of the box, 6GB RAM, and Snapdragon 845 processor. The model number listed on the benchmark site is Samsung SM-G965U1. Single-core and Multi-Core scores are listed and it appears information are recently uploaded.

We have another preview of the Galaxy S9+ as protective phone cases and covers appeared on Mobile Fun this week. The S9 is believed to have a single rear camera while the S9+ will have the dual real camera setup. The Galaxy S9 duo may possibly launch in February with a mid-March release. We know the two will arrive earlier than usual  but they might be teased at the CES 2018 this January.

Let’s wait and see how this one will be different or similar to the Galaxy S8 and S8+ phones.