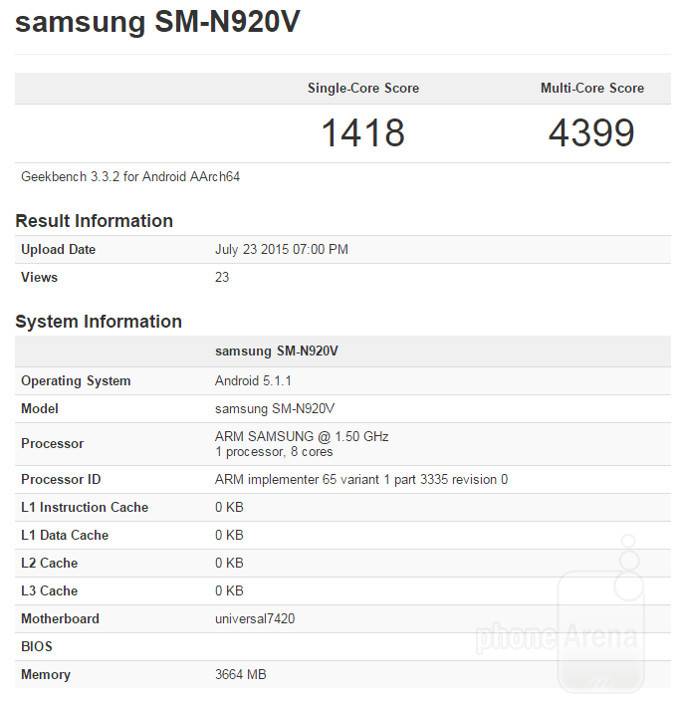 As D-Day approaches, we can expect more and more leaks and rumors about the upcoming Galaxy Note 5 will come out. For a number of weeks now, we’ve been hearing–and almost believing–that the next-generation Note 5 model would have an ejectable S Pen based on a previous patent filing, one that looks like a metal pen. But then again, there’s another report from South Korea that says there won’t be an ejectable pen and that Samsung will retain the manual slide method because of the glass back material.

The Galaxy Note 5 is expected to arrive this August 12 and so far, we learned that the device might have a microSD card slot unlike the Galaxy S6/S6 edge, a Write on PDF feature, premium with rugged build, and a USB Type C-port, glass back, and 4GB RAM.

Over the weekend, a Geekbench document was sighted that says the unit is being readied for Verizon Wireless. The SM-N920V model is believed to run a 64-bit octa-core Exynos 7420 processor, 4GB RAM, and Android 5.1.1 Lollipop out of the box. Upload date of the file was only last July 23 so information is fresh. The benchmark scores achieved and listed were 1418 for Single-Core and 4399 points for Multi-Core.

There’s another new rumor that the smartphone will even be out before August. We’re only a few days before July ends, four days to be exact, but it can be pretty exciting to anticipate or be surprised by this metal and glass backed mobile device that’s been the subject of the rumor mill for quite some time.