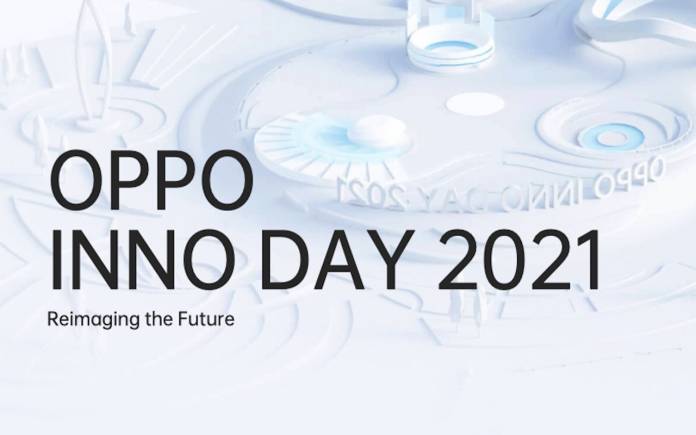 OPPO is set to launch a new product before the year 2021 ends. The OPPO Reno 7 series was recently introduced with a 4500mAh battery, 90Hz screen, and 5G. The OPPO PEACOCK foldable phone was also teased and it could be the highlight of the upcoming OPPO INNO DAY 2021. The special event is happening on December 14 which is one week from today. Last year, we remember the OPPO X 2021 rollable concept smartphone being presented. This year, a new flagship device is expected to be released and it could be a foldable phone.

The official event will be held in Shenzen, China on December 14 to 15. Everyone is invited to visit the virtual Inno World at the same time. It’s a first for OPPO so it should be exciting.

OPPO promises the online launch will be the “most interactive” in recent years. It hasn’t been long since the Chinese OEM started this annual event. In 2019, several products like a smartwatch and AR glasses were introduced. The rollable concept smartphone was shown off in 2020 but it hasn’t been released commercially.

A new flagship product will be unveiled next week. It could be the OPPO Find N foldable phone that recently received an MIIT Certification. Model PEUM00 is believed to be a foldable smartphone. This means a possible rival of the Samsung Galaxy Z Fold, Huawei Mate X, and the Xiaomi Mi Mix Fold.

We only heard about the OPPO PEACOCK foldable phone. We know the company has been working on a related design with all the rumors and speculations that have leaked. As early as January 2018, OPPO filed a patent for a foldable smartphone. We noted a foldable smartphone would be announced at MWC 2019 but there was nothing. We even said OnePlus could follow.

A render of an OPPO foldable phone with a pop-up camera surfaced. And earlier this year, we mentioned OPPO has started working on their own foldable smartphones. More related details are expected to be revealed in the coming days by OPPO so let’s wait and see.