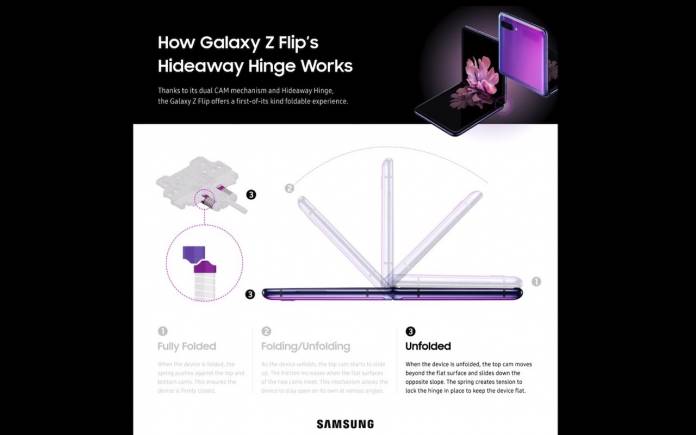 The Samsung Galaxy Z Flip is the South Korean tech giant’s second foldable phone. It’s not the next-gen Galaxy Fold but a first from the Galaxy Z line. The foldable smartphone has utilized the clamshell form factor that makes it a direct rival of the Motorola RAZR. The device was introduced together with the premium flagship Galaxy S20 phones. We must admit the Galaxy Z Flip isn’t perfect but it has captured the young generation. It’s not the best but it bears a novelty in its own way.

The Samsung Galaxy Z Flip received decent scores on DxOMark but not enough to consider it the best. It has also received a new software update. The phone sold out quickly and was soon the subject of a teardown that revealed a not so dust-resistant design.

There was a time when a Samsung Galaxy Z Flip showed a cracked screen soon after it went official. We have many questions about the phone that a teardown video and a series of durability tests somehow answered.

Samsung has generously presented the Galaxy Z Flip’s Hideaway Hinge that includes a Dual CAM Mechanism. The technology allows gradual folding that also lets the phone to stand on a surface like a laptop. The Hideaway Hinge is made slim because of the dual CAM mechanism that is further explained in a video.

Samsung has definitely ‘pushed mobile engineering to its limits’ with the Galaxy Z Flip. From design to execution, the company prepared for the foldable clamshell phone. The Hideaway Hinge is one special feature that allows the screens to be position at different angles. It’s also considered as the “backbone” of the phone.

To ensure quality folding-unfolding, Samsung has a hinge that is stable and strong and yet able to offer a smooth experience. Samsung also needed to prevent small particles from getting inside. The solution is the Hideaway Hinge technology that includes the dual CAM mechanism and sweeper technology.