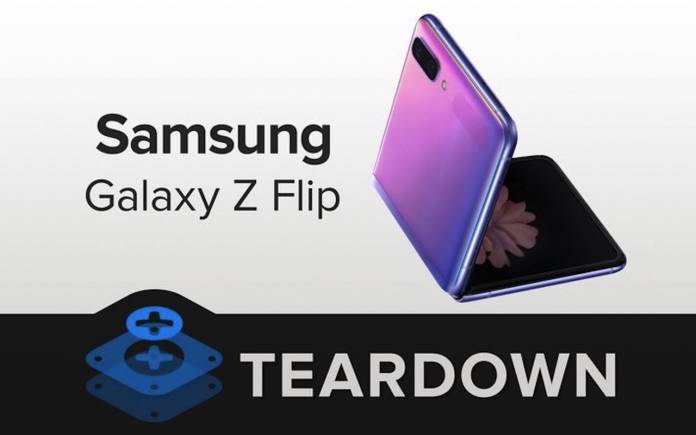 The Samsung Galaxy Z Flip is one of the two new foldable phones available in the market today. It’s a direct rival of the Motorola RAZR. Both foldable smartphones come with the clamshell design. They’ve been highly anticipated but as early as now, the two are disappointing many in the mobile industry. The Motorola RAZR’s screen was found to be cracking and peeling after one week. It’s low on repairability and gave up after 27,000 folds. Interestingly, Motorola isn’t bothered.

As for the Samsung Galaxy Z Flip, the foldable device’s screen scratches early at level 2. As it turned out, the first protection over the UTG (ultra-thin glass) is plastic. Samsung insisted there is glass underneath. Indeed, there is the ultra-thin glass. Some issues already encountered include are cracked screens. Opening any device usually reveals where there is such a problem but for the Galaxy Z Flip, we just want to know how a device is repairable.

IFixit got to open a new Samsung Galaxy Z Flip. It’s more repairable compared to the Motorola RAZR but only by a one-point difference on repairability score (2 vs 1). Some good news: many parts are modular so they can be replaced independently. You only need one Phillips driver to take out all screws.

IFixit noted some disadvantages like a more difficult way to replace the battery, no thanks to very few stretch-release adhesive and those poorly-routed cables. No need for those glued-down glass panels. Some components are discovered to wear out easily over time.

Before the teardown analysis was done, the IFixit coated the Samsung Galaxy Z Flip with purple dust. This is to know if dust can get inside. We’re not sure about its dust-resistant rating but it will be interesting to know.