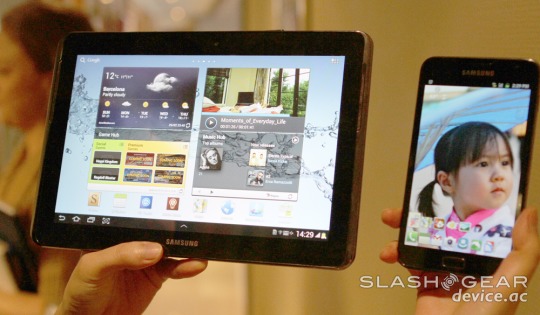 Since we’re live at MWC, you’ve undoubtedly noticed the massive amount of hands-on articles we’ve managed to get up today. So instead of a wrap-up, this will consist more of a ‘hands-on’ summary of devices for our second day at MWC. First up, we got to glance at the new Samsung Galaxy Note 10.1. We received a few snapshots with it alongside the original 5.3″ Galaxy Note for an easy comparison. Usually you don’t see devices ship with Adobe Photoshop, but the Note 10.1 will already include Photoshop Touch and Adobe Ideas – a few apps that cost $10 each on the Android Market.

Next up, we managed to handle all three new devices from ASUS. We first got to play with the ASUS Transformer Pad 300, an LTE tablet that is much like the Transformer Prime. It’s only difference is a slightly lower resolution, and its bezel is composed of plastic instead of aluminum. We then saw the Transformer Pad Infinity 700, a tablet that looks almost identical to the Prime. Unlike the Pad 300, this one will have an even better resolution than the Prime. And finally, we were able to see the Padfone up close. It was my personal favorite, and is bound to change the mobile industry. Be sure to check out the included bluetooth headset built into the stylus in their new YouTube advertisement.

Toshiba unveiled a 7.7″ quad-core prototype tablet today as well. It was unbelievably thin, in the 8mm range even. We’re not really sure on it’s specs but can tell it will offer external storage via a microSD card slot. It’s code-named the AT270, so we’ll need to keep an eye out for more information down the road. Huawei also had a couple tablets at MWC this year as well; the MediaPad 10FHD and Ascend D smartphone. The Ascend is a quad-core device, coming in at 4.5 inches and hosting a vanilla version of Android 4.0. Unlike the Galaxy Nexus, they’ve opted for capacitive buttons instead of an expanded screen. As for the MediaPad 10FHD, it will ship with both a WiFi-only version and 3G/4G variants.

And finally, it’s worth mentioning the Orange Intel ‘Santa Clara’ phone. Unveiled by Orange, the device is definitely a prototype. The ‘Santa Clara’ comes without a manufacture and was probably produced to show off Intel’s Medfield processor clocked at 1.6GHz. Be sure to check out the hands-on clip!