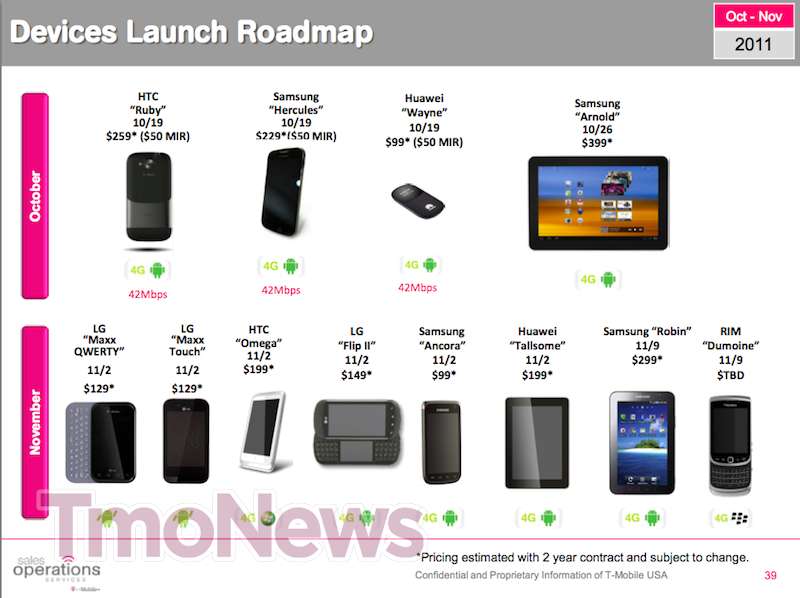 T-Mobile may be bemoaning the lack of a certain Jesus phone today, but if you’re an Android fan, there’s plenty to look forward to. No less than six new devices from LG, Samsung and Huawei are in the pipe for release next month, with confirmation on the HTC Amaze 4G, Samsung Galaxy S II and Galaxy Tab 10.1 this month. Check out the full round-up below.

First up is a pair of LG mid-range phones, code-named “Maxx QWERTY” and the “Maxx TOUCH”. These appear to be the same phones leaked a couple of weeks ago, and they will probably be branded the “MyTouch by LG” and the “MyTouch Q by LG”. The phones appear identical except for the slide-out keyboard, and should debut at $129 on-contract. Next up is the LG “Flip II”, a 4G split Qwerty phone with a unique secondary screen right on the keyboard. This interesting Gingerbread phone is priced at $149.

Following is the Samsung “Ancora”. It’s tough to tell from the small photo, but it looks a lot like a member of the Galaxy S family, probably one of the smaller, cheaper models like the Galaxy W given its list price of just $99. That’s a pretty good deal for a 4G Android smartphone. Filling out the order is a pair of tablets, the Huawei “Tallsome” (almost certainly this 7-inch Honeycomb tablet) and the Samsung “Robin”, which we’re guessing is the updated Galaxy Tab Plus. All these devices are set for a November 2nd release, except for the Samsung tablet, which will come a week later.

The LG Flip II is the most exciting new device on the list, if only because of its unique form factor. It probably won’t strike a chord with everybody, but I’m always glad to see manufacturers try out new designs like the Kyocera Echo. You never know what might be the next big, or in this case, small, thing.