Behold! The thinnest and lightest tablet of them all! It’s straight outta Samsung and it’s got the newest Android system, that being Android 3.1 Honeycomb (as opposed to 3.0, that is,) and it’s coming right at cha. Know before we start in here that we’ve gotten a look at the slightly earlier edition of this tablet in the Samsung Galaxy Tab 10.1 Google I/O Limited Edition Review, but that this version is more of a “complete” version of the tablet in that it will hopefully be free of blemishes. We’ll have our eyes glancing sideways at that while we give this masterpiece of a bit of hardware a full-on look over a full review period. Meanwhile, lets have a look!

This device is Samsung’s latest greatest effort and certainly a bigtime one with a 10.1″ TFT display on a 10.09 x 6.81 x 0.34 (256.2 x 172.9 x 8.6 mm) chassis, 1GHz NVIDIA Tegra 2 dual-core processor and 65536 MB built-in memory, and, although we predicted it based on previous iterations of the device, no expandable memory slots. This device carries a massive 7,000 mAh battery that we’re thinking will last us basically into infinity, and a surprisingly modest set of cameras on front (2-megapixels,) and back (3-megapixels.) The only ports you’ll be working with are the Samsung proprietary slot that transforms into USB at the bottom of the device and the headphone jack at the top. 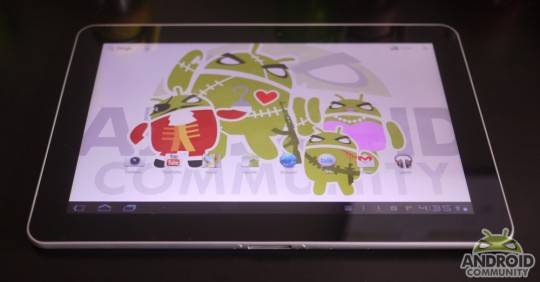 This device is part of a recent smear campaign aimed at the iPad 2, is responsible for its counterpart the Limited Edition Google I/O Galaxy Tab 10.1 getting Android 3.1 second on the market (after the Motorola XOOM on Verizon getting it first,) and it’s available for purchase right now at Best Buy for $499.99 for the 16GB variant and $599.99 for the 32GB.

You can see several of the Galaxy Tab 10.1 accessories here on video or on the slip that comes with the device, and of course, it’s smaller brother will be coming soon in an 8.9 inch screen form factor… apparently with a fatter and dimmer screen? Strange stuff! That said, lets have a look at this sassy lady!