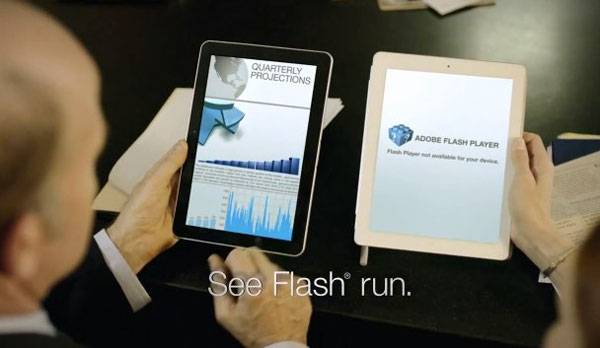 We all knew that the inevitable comparisons and mudslinging ads were coming when the Galaxy Tab 10.1 first surfaced. With the Tab 10.1 coming soon, the first mudslinging commercial from Samsung has landed pitting the tablet against the iPad 2. Samsung doesn’t say the tablet in some of the scenes in the commercial is the iPad 2, but we all recognize the iPad 2 and its smart cover when we see it. The commercial shows people watching others doing cool things with the Tab 10.1 and then buying one themselves.

I know that many iPad and iPad 2 owners still pine for Flash video support, which will likely never come officially. Whether or not simply having support for Flash is going to be enough to make the Tab 10.1 competitive with the iPad 2 in the minds of the average consumer remains to be seen. I doubt flash alone will do the deed for Samsung.

What the Tab 10.1 needs is a price that is considerably cheaper than the iPad 2 and then consumers will start taking a serious look at the tablet. If you like Samsung and are interested in the Tab 10.1 the commercial is worth a watch. People aren’t kind in the video comments though.