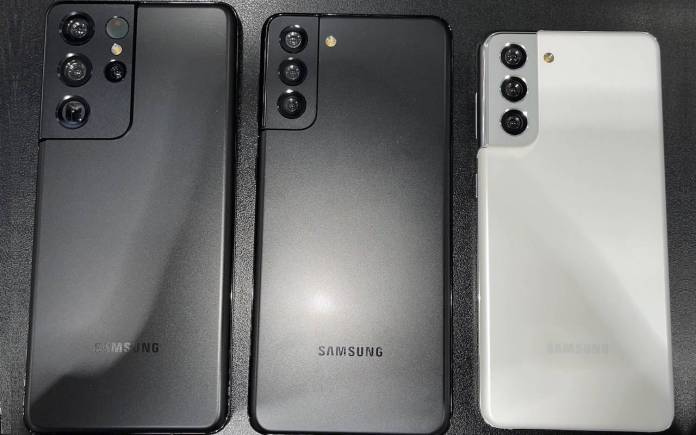 We are only counting the hours until the South Korean tech giant makes the big reveal. The new Samsung Galaxy S21 smartphones will be announced tomorrow and we’ve got early hands-on images here. They’re not ours. We’re just sharing posts by a source who said he received the demo devices from Samsung. The phones were sent to him ahead of the Galaxy Unpacked 2021. He then shared his first impressions of the Galaxy S21, Galaxy S21+, and the Galaxy S21 Plus.

Mr. Techie (@We_The_Techies) described the Samsung Galaxy S21 Ultra to be thick. It’s obviously thicker compared to the Galaxy Note 20 Ultra and the iPhone 12 Pro Max. He shared the fact that “carrier employees are being trained to not mention the plastic backs at all”. The Ultra and Plus variants do have glass backs. However, our source said they feel like plastic because of the matte coating.

The phones also don’t have power adapter in the box and there is no expandable storage. The SIM card tray on all three phones has been relocated to the bottom after so many years. As for the color options, there will be the purple or lavender version with a rose gold camera module.

The Samsung Galaxy S21 will have a plastic back. It will be sold with a starting price of $800–making it the most affordable premium flagship from Samsung yet. Mobile networks in the United States are expected to offer major promos to sell the phone.

The Galaxy S21 will also come in silver. The Ultra variant will arrive in 128GB as base storage with 256GB or 512GB option. No more microSD card slot. RAM will be 12GB or 16GB. The Samsung Galaxy S21 Ultra will be powered by a 5000mAh battery while the Galaxy S21+ will run on a 4800mAh battery.