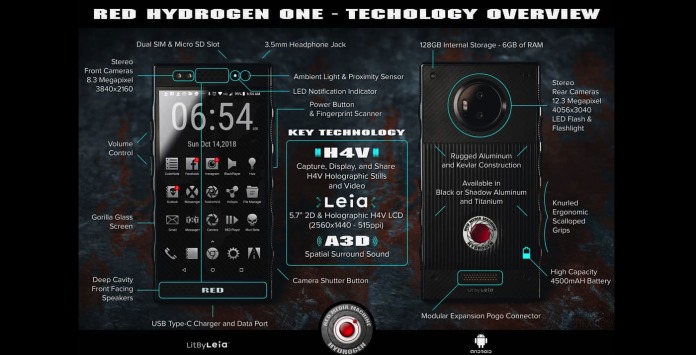 The RED Hydrogen One phone is coming. Oh, we’re certain about its arrival now that we’ve seen a technology overview. Not that previous reports aren’t enough to convince us but learning pre-orders are about to ship give us assurance the long-anticipated smartphone is for real. It’s been over a year since the RED Hydrogen One launched as the world’s first holographic media machine but we have yet to see a unit. A prototype shown was off in a video which made us excited to see the full 4-View holography.

Several things happened along the way. Back in January, we were told the Hydrogen One holographic phone would ship by summer. It was delayed again and then was said to be ready soon from AT&T and Verizon. Pre-registration was opened but new issues were encountered as it hit the FCC last August.

Pre-orders are reported to have started shipping this week according to philhollandphfx. He shared an image of the Red Hydrogen One phone with its specs and features listed.

??? ???????? ??? – ???? ???????? This week pre-orders begin shipping. There is a great deal of new and/or exclusive technology found within the HYDROGEN ONE smartphone, which is notable in the mobile landscape of 2018. Capturing and Displaying Holographic H4V content is the big one for a glasses-free 3D experience, but things like Spatial Surround Sound A3D will affect daily use in a big way. The design is rugged and “meant to be held” rather than a smooth piece of glass destined for slippage. With an eye towards the very near future, especially for content creators, Modular Expansion is going to truly set this device apart from anything else out there. Aristotle once said “the whole is greater than the sum of its parts” and that applies here. HYDROGEN ONE is the beginning of something new. That picture will become clearer soon. This is much more than a smartphone. It's a RED Media Machine. Here's a keynote in a single graphic of all of HYDROGEN ONE's tech. #RH1 #R3D #android