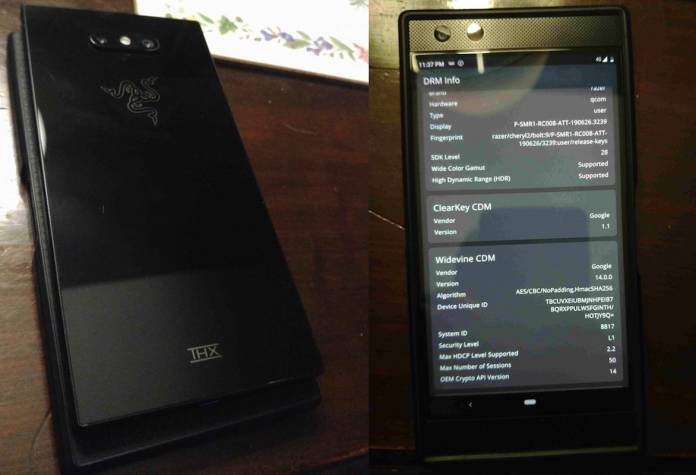 The Razer Phone series is just a little over two years old but it has proven its worth especially in the mobile gaming industry. It’s probably the first ultimate gaming phone we never knew we needed. Razer’s acquisition of Nextbit has helped in the design and development of the Razer Phone which came out powerful with Snapdragon 835 chipset and 8GB of RAM. It became popular despite the lack of audio jack. The gaming-centric phone received a bunch of updates that delivered important enhancements and new features.

Talks of a Razer Project 2 started even before the Razer Limited Gold Edition was released. The second-gen model was confirmed and even reached the AnTuTu benchmark with Qualcomm Snapdragon 845, 8GB RAM, and Android 8.1 Oreo.

A Satin Black version of the Razer Phone was also revealed in April. A new variant may be out soon as a prototype with THX logo has been spotted. XDA devs shared the images below of a new Razer Phone.

It’s not a Razer Phone 3, just a Razer Phone 2. The phone is already said to be an old build from June 2018. It comes with dual SIM slot, 512GB onboard storage, widevine L1 support, and a different hard key combo for recovery. The phone comes with the bootloader unlocked.

The presence of a 512GB onboard is alone, a big upgrade because the Razer Phone 2 only has two storage options: 64GB and 128GB. A single SIM slot is also an original feature. With the THX audio tech, we’re not surprised if the smartphone needs more storage and better specs.

THX audio could mean the Dolby Atmos tech and dual amplifiers will be overtaken. An upgraded audio experience is more than welcome especially since the device can run many complicated games.

So a THX Razer Phone 2 is on the horizon. That could be an exciting addition to the Razer Phone line up. Razer is unsure about a 3rd-phone for many reasons but it can still be considered. What do you think?