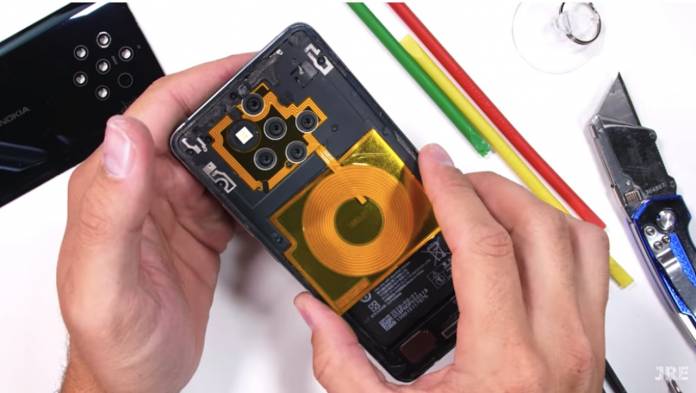 The Nokia 9 has been on a long journey. We first mentioned it back in 2017 as we were expecting it would be released that year. It was thought to have an iris scanner and OZO spatial audio but the phone was reportedly canceled by HMD Global. Fast forward to a few months later, it was resurrected but with a number of changes already including the Snapdragon 845 chipset, in-display fingerprint sensor, a notch design, and the idea of five lenses which meant multiple cameras.

The Nokia 9 PureView Beholder Android One phone was promised to be out soon. The five-camera design was demoed on video. The launch date, availability, and pricing details were leaked. The phone was then finally announced at the Mobile World Congress 2019. The phone already received an early update that added Face Unlock and another one.

Zack Nelson aka JerryRigEverything has managed to do a teardown analysis. That’s something we’ve only been waiting for him to do. The video is out and ready to satisfy your curiosity:

Who isn’t curious about the Nokia 9 PureView? The phone has got five cameras–not just one, two, three, or four–five! Many people are saying five cameras aren’t needed but Nokia dared to implement the unique design. You may think that images captured by the phone should be of the highest quality. We haven’t tried the phone in a more comprehensive manner so we can’t make a judgment yet.

Watching the teardown, we can only say there’s too much of everything–too many adhesive and yes, too many cameras. It’s a bit challenging to remove the back panel. Even when you get inside, the components stick to one another.

The battery is very much glued so you need to be very careful not to damage the fingerprint scanner and display ribbon just underneath it. So it’s difficult to pry open. This only means it’s not that repairable.