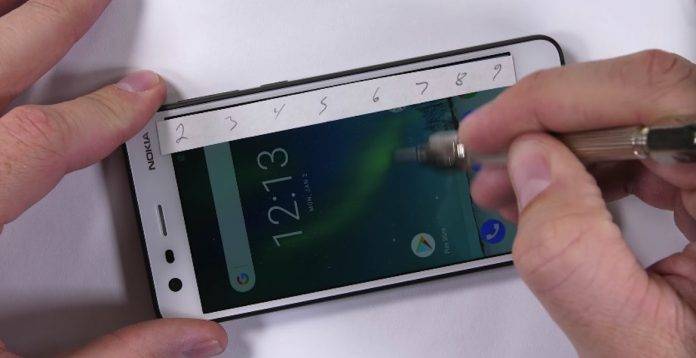 The Nokia 2 entry-level phone was first announced in Europe. It arrived in the US through Amazon and Zack Nelson soon tested the phone in a series of Scratch, Burn, and Bend Durability Tests. If you may remember, the Nokia 8 was tested a couple of months ago with the same tests. It did pass and JerryRigEverything concluded that the phone is enough to stand the test of time as it is durable and solidly built.

The Nokia 2 is a budget-friendly smartphone but has potential to become a bestseller. With a price under just $100, it is definitely worth your money. If you need a basic smartphone, this one is highly recommended.

The Nokia 2 out of the box looks and feels very solid. The white and black color combination is simple may even remind Star Wars fans of a stormtrooper according to Zack. It still has a headphone jack and a pair of headphones comes with the phone.

The screen is only a Gorilla Glass 3 and it scratches at level six on the Mohs scale of hardness. The 5MP front-facing camera is also covered by the same glass so it doesn’t scratch easily. The earpiece is covered by a thin piece of vinyl which can be easily pulled. It can cover the earpiece though from any dirt.

The back panel is a removable white plastic that scratches which is fairly normal. The rear camera is covered by a glass display. The sides are made of metal.

The burn test only made the 5-inch IPS LCD last only five seconds while bending the phone from the back and the front display doesn’t do anything. There is a slight flex but not enough to destroy the phone.