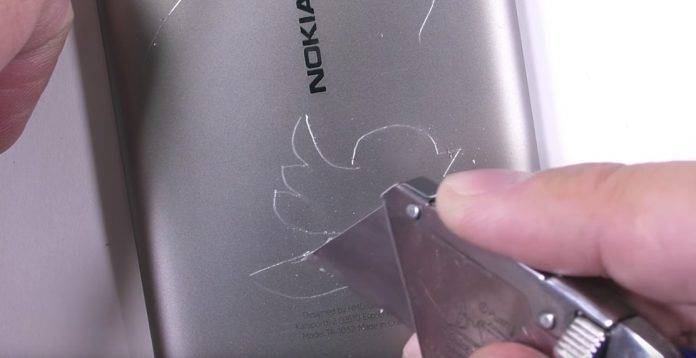 The Nokia 8 is the Finnish brand’s first ever flagship phone. There are other Android-powered Nokia phones such as the Nokia 3, 5, and 6 but the 8 holds the title of being a premium device. First launched in August, the Nokia 8 rolled out with a unique ‘Bothies’ feature and some other premium specs. We know the phone is ready for the Android 8.0 Oreo update but we’re more interested to know how durable the phone is. Good thing there is Zack Nelson to answer our questions by doing his own Durability Test.

The Nokia 8 has just undergone a Scratch, Burn, and Bend Test. As with any other premium flagship phones in the market today, this deserves our and JerryRigEverything’s attention because of its premium price. As the most powerful Android phone by Nokia to date, we know it has potential to become a bestseller. It’s not really the Bothies feature that will make people buy this Nokia smartphone but its durability and performance in many situations.

The Scratch Test has shown the front Gorilla Glass 5 display with the Mohs pick scratching only at Level 6 to Level 7. This is standard for premium phones but this also means coins and keys will not damage the screen. Scratching the home button and the front-facing camera doesn’t damage them. What’s first to be discovered as being damaged is the nylon cover on the earpiece.

Light scratching the back panel shows some scratches that can be easily removed by rubbing off. Scratching with a razor though is a different story. The dual camera system is covered by glass so the area doesn’t scratch. The sides of the Nokia 8 are also made of metal except for the plastic antenna band and the bottom edge.

Placing the phone under the flame for ten seconds, the screen shows some black which goes away after some time. When bending the phone from the back and the front screen, the Nokia 8 doesn’t flex at all.

Zack Nelson’s conclusion? The smartphone is more than enough to stand the test of time. It is durable and is solidly built—that is what Nokia is all about.

Watch the video below and see for yourself: