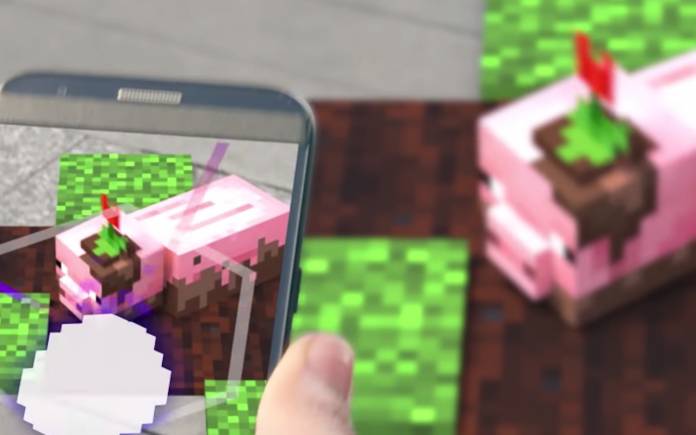 The most popular AR game is perhaps Pokemon GO. It’s been three years since Niantic Labs and Nintendo launched the mobile game that introduced millions of people to augmented reality. AR isn’t exactly a new technology but it only became popular because of Pokemon GO. More similar games were released but nothing ever surpassed the milestones reached by Pikachu and friends. There is Harry Potter Wizards Unite to look forward to and this: Minecraft Augmented Reality.

That’s right ladies and geeks–Minecraft is rolling out an augmented reality game as teased by Microsoft in a video. There is little information shared but the video below shows the possibility of a Minecraft AR game.

We’re certain you’ve thought about it before (I know I did). It’s coming soon but little is known about the game. Launch may happen on May 17, 2019 so check Minecraft.net regularly.

A Minecraft pig is seen in the video. We see two villagers in augmented reality but they’re neither Steve and Alex. There’s no sign of The Wither but we know it will show up someday.

The video above is only a teaser. Microsoft has been silent the past few months but the last update we featured was about the Minecraft Bedrock edition welcoming the pandas. Minecraft beta has been testing Mixer streaming platform integration. If you may remember, the Minecraft: Pocket Edition got four new skin packs and a legendary map over a year ago.

Mojang was set to bring Minecraft platforms together but we don’t think the AR game has something to do with it. This isn’t the cross-platform support and not just an update to the Minecraft: Story Mode.

The Minecraft augmented reality game will be new and different. If you’re a fan of Minecraft and Pokemon Go, we won’t stop you from anticipating for this new title for Android. Minecraft AR? It’s finally happening. We just hope very soon.