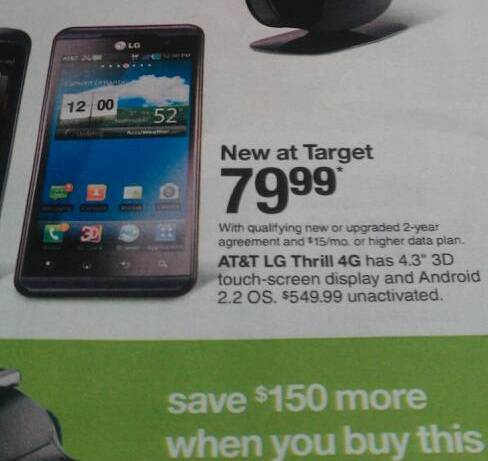 We aren’t really sure what AT&T and LG are doing with the LG Thrill 4G (or Thrill 3D) or whatever they are calling this phone, but we are seeing that awesome $79.99 sale price appearing again. The LG Thrill 4G was originally known as the Optimus 3D and you can see our review here. The Thrill 4G was supposed to launch on August 7th over at RadioShack and was even advertized by AT&T for $99 coming early August.

Now after more than a few delays another ad has appeared, this time Target is showing it for the low price of $79.99 again. This is an amazing price no doubt, but we have no clue when you’ll actually be able to purchase this glasses-free 3D smartphone. First we heard it was delayed til the end of August, but another report has recently appeared suggesting a September launch. So yes the $79.99 or $99 price tag is awesome but until we get an actual release date or some solid information all this offers is a potential good deal.

We’ve also seen the LG Thrill 4G show up in a Best Buy ad named the Thrill 3D so AT&T and LG might be changing the name or marketing strategy, but that shouldn’t take this long. I’m just hoping they didn’t find some hardware issues with the phone or else we might have another LG G2x “situation” on our hands.

While we wait for some official news on this phone feel free to check out this teaser video of CyanogenMod 7 running on the Optimus 3D.