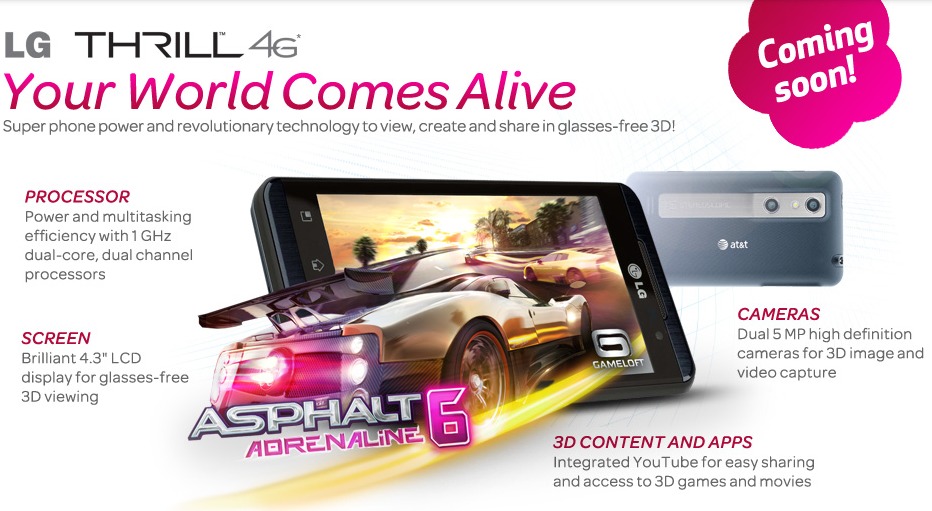 Just a few days ago we saw pricing and launch dates appear for the LG Thrill 4G from RadioShack suggesting the phone will launch on August 7th, and be just $80 dollars. Pretty amazing price for a dual-core 4.3″ device that also manages to shoot and record in 3D too. It appears that AT&T is now giving out a few more details regarding this glasses-free 3D phone.

Today AT&T released details regarding all current 2011 Android phones stating that all phones from 2011 will be updated to Android 2.3 Gingerbread. That same press release they also briefly mention the LG Thrill 4G and even though they’ve still not said anything about a release date, they did mention it will be just $99 at launch. This is an extremely good price and most phones are $199 with a new 2-year contract so offering it for $99 is new to me.

For now we will just assume it will be launching on or around August 7th like RadioShack suggested but we wont say anything official til we hear it from AT&T. Lucky for us before it became the LG Thrill for AT&T it was known as the Optimus 3D and we already were able to do a full hands-on review so feel free to check that out before its release to help you decide if it’s right for you. AT&T should update us any time now so we will report back when the time comes.