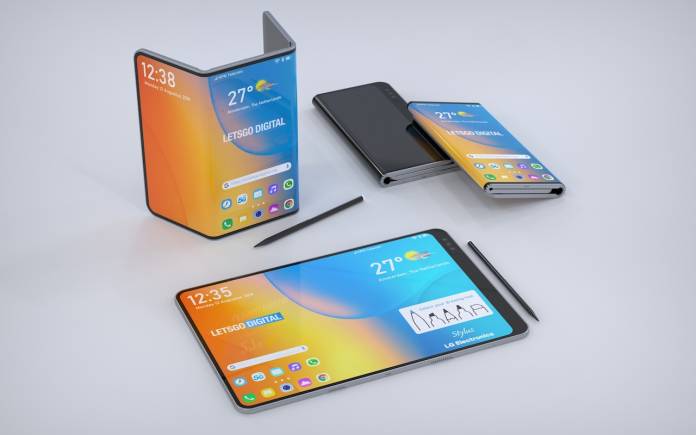 The idea of a foldable phone from LG is nothing new. In fact, as early as 2016, the company filed for patent application of a foldable and transparent touchscreen. Another patent was filed for a foldable hybrid phone-tablet. The following year, another set of patent images of LG’s first foldable phone was sighted. It seems LG wants to make things right and so patents are being submitted to the correct agency. More patent applications have surfaced. Even related trademarks were already filed.

Just last July, LG once again filed for new trademark applications for “Folds” and “Arc”. We’re positive LG is working on something and we’re looking forward to the IFA 2019 as the company will ‘Defy Limits’.

Another set of rendered images have surfaced online. Thanks to LetsGoDigital for the renders of what could be the LG foldable phone. We’ve seen different designs already but what’s interesting about the new images is the double folding display.

This mysterious LG foldable phone can be folded twice, making it different from other foldable phones from other OEMs. It actually reminds us a bit of that Samsung phone with three folds previously rendered on the same site.

The LG foldable phone appears to have stylus support. LetsGoDigital based these renders on several sketches filed with the Korean Intellectual Property Office (KIPO). We’re looking at a larger and longer foldable phone that can be folded twice.

The phone form looks like an ordinary phone with curved edges that extend to the back. It looks very compact but when stretched out, produces a bigger slate. The two folds transform the smartphone into a tablet. It’s 3x the size of the phone display. When folded, the three cameras are placed on the upper right of the rear part. When display is laid out, it remains in the upper right position.