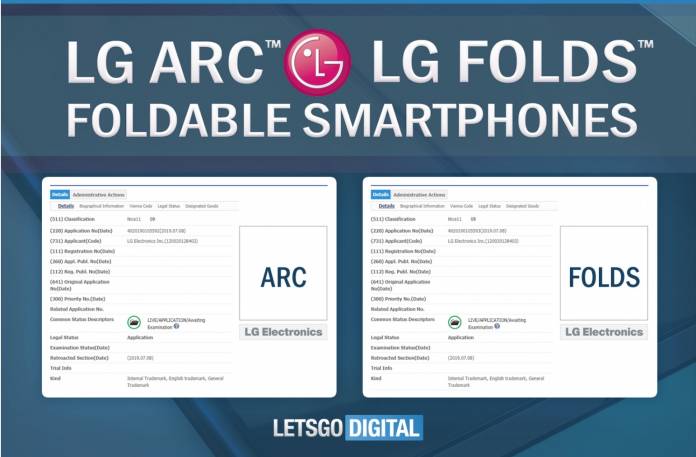 While we still don’t know for sure what LG’s plans are for its possible foldable or bendable phones, it looks like they’re covering their bases at least when it comes to names. The South Korean OEM has filed two new trademark applications for the names “Folds” and “Arc” and respective logos as well. Fortunately for them, they have been granted the trademark. This may mean new model names or a function or feature on the device that they would like to have a special name for.

According to Dutch site Let’s Go Digital, LG had previously registered several names for their planned new devices, like Flex, Foldi, Duplex, and Bendi. Now they’re adding two more names to the fold as they filed the trademark application for “Folds” and “Arc” with the Korean Intellectual Property Office. However, we all know by now, names don’t necessarily result in actual products. We still don’t know also what are their future plans except that they eventually plan to release a foldable or bendable display device.

While both Samsung and Huawei already announced their own folding phones, the Samsung Galaxy Fold and the Huawei Mate X respectively, they have both decided to delay the actual release of the devices. In Samsung’s case, early bad reviews has led them to re-evaluate the device. This has given their rivals a little more breathing room to work on their own foldable or bendable phones, and that includes LG.

However, they have yet to show or even leak a prototype of their planned device. This may mean they are keeping things very tightly under wrap or they are investing more in creating something that will actually work and not be like Samsung’s earlier version of their Galaxy Fold. LG has previously filed for various patents on this, sometimes the flexible display is outside and sometimes it’s inside.

It would be interesting to see which OEM will successfully get this flexible display out the gate and one which will be well-received by users and critics alike. Of course, we’ll bring you news about developments here, whether it’s Samsung, Huawei, or even LG which will start of this supposedly new dawn of displays.