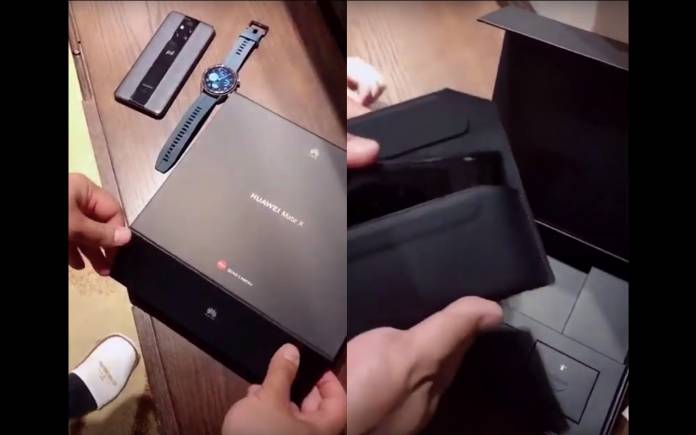 The Huawei Mate X is not a joke. The Chinese OEM wasn’t able to beat Samsung in releasing the Galaxy Fold but it still has a chance to finally do so once the new Mate X is out. The company delayed the release because it wanted to perfect and optimized the foldable phone especially after what happened to the Galaxy Fold. It’s just being careful not to have the same failed launch. As promised, the Huawei foldable phone is rolling out this October with a more powerful chipset and own mobile OS.

We’ll soon know if the Kirin 990 processor is present. The Huawei Mate X is also said to be lighter because of a smaller battery. Of course, 5G connectivity is highly anticipated as well.

An unboxing video has appeared on Weibo and it seems to be legit. The Huawei Mate X folding phone looks neat on the video below and looks sturdy. We’re not sure about the durability yet but the hands holding the phone don’t appear to be being careful.

If we are to compare the new foldable phone with the old Mate X design, we can say this one has been improved with Kirin 990 with 5G, and buckle design. There is a back button to pop up the screen. Inside the box is a special leather case that holds the folded Huawei Mate X.

Before the concept Huawei Mate X 2 foldable phone with a stylus is released, here is the Huawei Mate X first. The phone has been spotted in the wild and is the first phone to be 5G CE certified by TÜV Rheinland.

The Huawei Mate X was first introduced back in February but it was delayed a bit because of several reasons. Huawei is said to launch the phone before the end of October. We’re crossing our fingers it’s really durable and rugged.