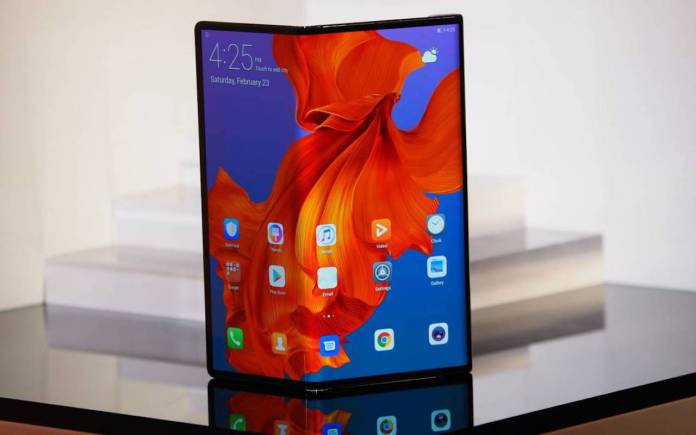 Apart from the Samsung Galaxy S10 and the Galaxy Fold, the Huawei foldable phone is also anticipated for several reasons. The top Chinese OEM has been teasing the public that it wants to beat Samsung to the punch with its foldable phone. The device was planned and then said to be out before Samsung Galaxy X. You know that didn’t happen but we believe the foldable screen phone category will see China-South Korea brands further in a battle. Huawei has always wanted to be No. 1. Beating Samsung may be a challenge for now but it’s not impossible.

Huawei foldable phone image renders were made available for scrutiny. It was also teased before its MWC 2019 unveiling and now we’ve got our hands on.

Huawei’s first-ever foldable smartphone, the Huawei Mate X, directly rivals the Samsung Galaxy Fold. It’s better because of the 5G connectivity but we have yet to do a comprehensive review.

The Huawei phone transforms into an 8-inch tablet when folded. When closed, the front display is 6.6-inches while the rear shows a 6.38-inch screen. Also placed at the back are the quad cameras and flash. The biggest display features 2480 x 2200 pixel resolution. The rear display delivers 2480 x 892 pixels while the front screen shows some 2480 x 1148 pixel resolution.

The Huawei Mate X 5G foldable phone is 11mm when closed. The thinnest section measures 5.4mm. At the edge, you will find a fingerprint scanner, volume rocker, and a power button. The rear display features Leica-engineered cameras that can be used for selfies.

Huawei implemented a Falcon Wing Hinge design to make the foldable phone a reality. The hands-on photos we have are legit so this isn’t just a concept phone.

The Huawei Mate X definitely has potential. Huawei’s Mate X is powered by a Kirin 980 processor with Balong 5000 modem for 5G. To be honest, it looks better compared to the Samsung Galaxy Fold. We’re just curious about the durability. But then again, it’s Huawei–the 2nd most popular mobile brand in the world today.